Test Summary
This experiment tests a process developed by Andrew Baldwin in which icing sugar is used to create an aquatint. Using a cake sieve, the icing sugar was dusted onto a grounded plate. For this test, the plate was etched for 20 minutes to create a darker tone. This plate was prepared with American icing sugar and was created side by side with the plate for Test 14 which used Tate & Lyle British icing sugar.

The icing sugar was pre-sifted and set aside to create a faster, more even application. The pile of pre-sifted (American) icing sugar was placed on the top of the mesh of a cake sifter. Sugar appeared much more coarse than the Tate & Lyle British sugar. Placing the plate directly underneath, the sifter was shaken from side to side to allow the sugar to dust down onto the plate. A 4-inch, flat scraper was then used to move around the rest of the sugar on the mesh to allow it to fall onto plate. This was continued until the plate was completely covered in sugar and no red of the ground could be seen through the layer of white sugar on surface. The sugar was lumpy, sticky and falling in large particles down onto the grounded plate. Plate was left alone with heap of sugar for 5 minutes. Plate was then lifted vertically and tapped on it’s edge against the table to remove excess sugar. The appearance of the plate surface was coarse and very speckled. The plate was left alone flat on a table for 30 minutes to allow the sugar to dissolve into the ground. 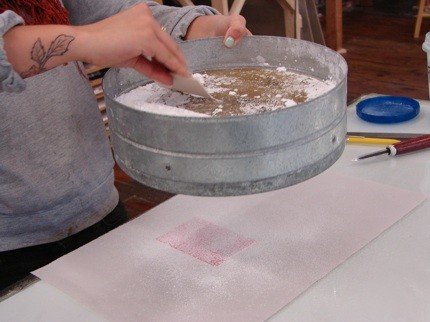 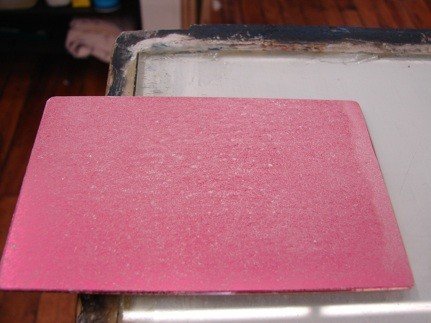 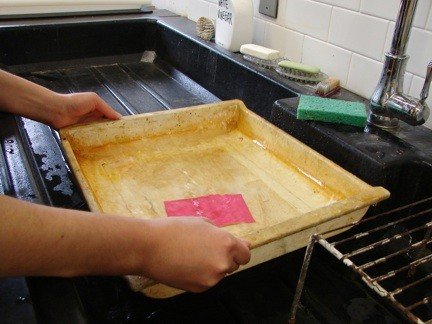 Etching Notes
Plate was placed in tray of salt and vinegar to remove any oxidation, blotted with newsprint and backed with contact paper. Plate was placed flat into a tray of ferric to etch for 20 minutes. While plate was in tray, acid was carefully sloshed from side to side to avoid having bubbles form on the surface which would result as a resist. While plate was etching, circular shapes begin to form in the ground and the ground begins to flake off. The ground started to flake at 5 minutes in the acid and was barely there by the end of etching at 20 minutes. 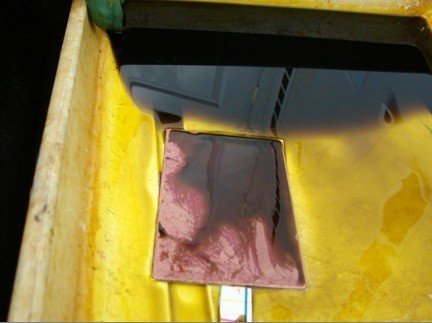 After Bath Evaluation
There was barely any ground on the plate when it is rinsed. There was a lot of variation and pattern in the surface. 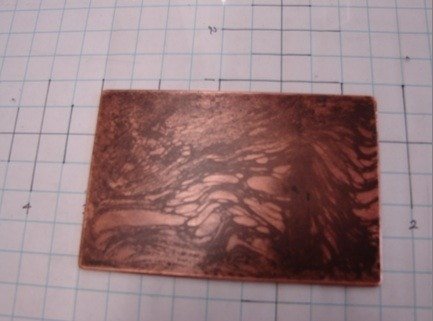 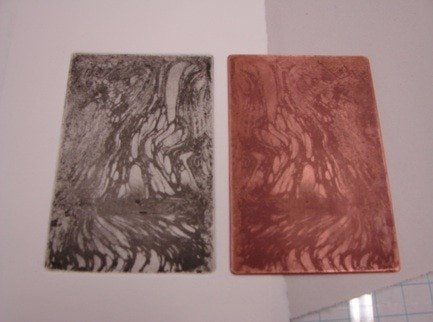 Test Conclusion
Similarly to the previous test, the proof had a distinct, cloud-like, stenciled image. It is possible that this issue traces back to how it was degreased. The rolled felt used to degrease the plate could be contaminated. 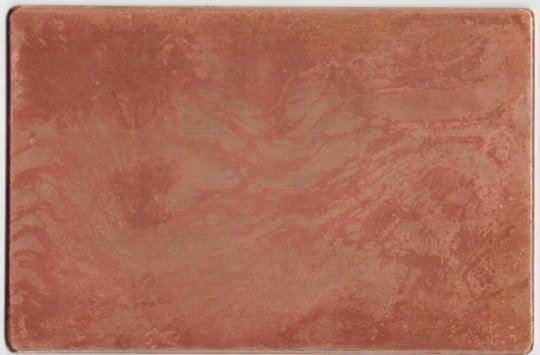 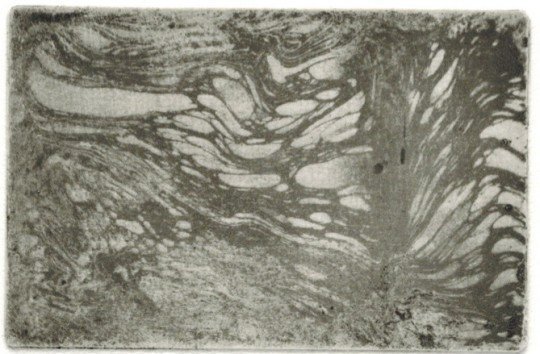