Test Summary
This experiment tests a process developed by Andrew Baldwin in which icing sugar is used to create an aquatint. Using a cake sieve, the icing sugar is dusted onto a grounded plate. Important variables that were tested were pre-sifting the sugar before sifting it onto the grounded plate and allowing the plate to rest with sugar on it for 30 minutes before baking.

Plate Preparation
The plate was polished with Putz and steel wool to remove previous marks and discoloration from oxidation. The plate was then cleaned with soapy water and degreasing spray to try to remove the majority of the grease. The plate was degreased with soy sauce that was rubbed onto surface with a scrap of rolled felt. The plate was rinsed under running water and placed in the brightener to check for remaining oxidation marks. The plate surface appeared polished so it was dried by blotting on newsprint and using a blowdryer. A thin layer of BIG ground was rolled out on a glass slab using a 10″ brayer. The ground was rolled onto the plate in all directions to apply a thin even coat. The oven was preheated at 240 degrees on the ‘convention’ setting. Plate was set aside as sugar get prepared.

In this test, the icing sugar was pre-sifted and set aside to create a faster, more even application. The pile of pre-sifted Tate & Lyle icing sugar was placed on the top of the mesh of a cake sifter. Placing the plate directly underneath, the sifter was shaken from side to side to allow the sugar to dust down onto the plate. After a few minutes of repeating this motion, the sugar was not coming down as quickly and evenly as expected. A 4-inch, flat scraper was then used to move around the sugar on the mesh to allow it to fall onto plate. This was continued until the plate was completely covered in sugar and no red of the ground can be seen through the layer of white sugar on surface. Plate was lifted vertically and tapped on it’s edge against the table to remove excess sugar. The appearance of the plate surface was even without any discoloration spots. The plate was left alone flat on a table for 30 minutes to allow the sugar to dissolve into the ground.

Plate was then placed into the pre-heated oven for 6 minutes at 240 degrees. After baking, plate was left alone for one hour. At that point, plate surface feels room temperature and sugar has hardened. 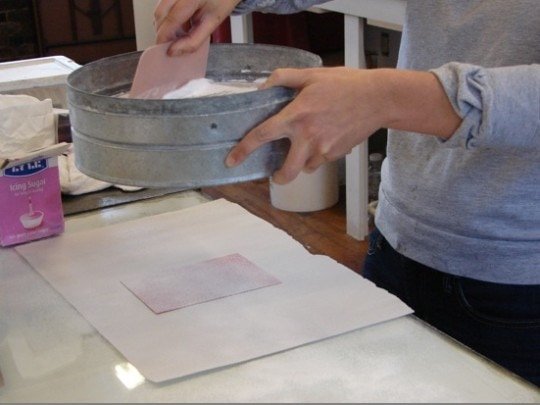 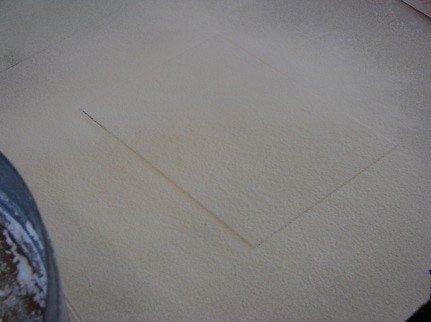 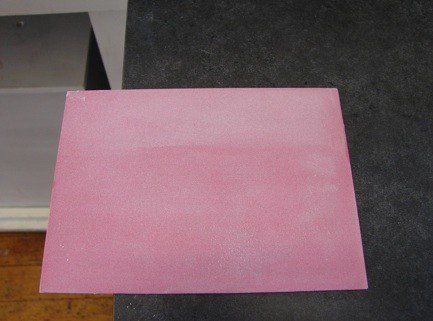 Etching Notes
Plate was placed in tray of salt and vinegar to remove any oxidation, blotted with newsprint and backed with contact paper. Plate was placed flat into a tray of ferric to etch for 10 minutes. While plate was in tray, acid was carefully sloshed from side to side to avoid having bubbles form on the surface which would result as a resist. After 10 minutes, there was some difficulty grasping the plate when it was time to come out so there are brushstroke-like marks on the surface made by the rubber gloves scratching the plate. Plate was rinsed under faucet. 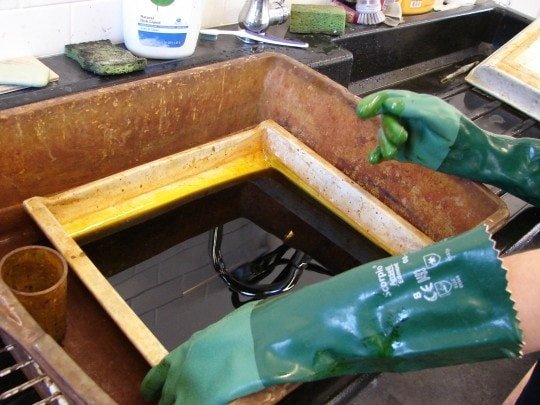 After Bath Evaluation
The marks made from the rubber gloves were visible in the plate surface. They appeared as a lighter-copper color. 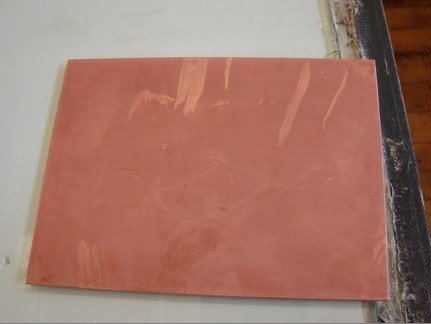 Inking Methods
Plate was inked using Gamblin Portland black. The ink was carded on with mat board scraps, wiped in gentle circular motions with used tarletan and palm wiped. 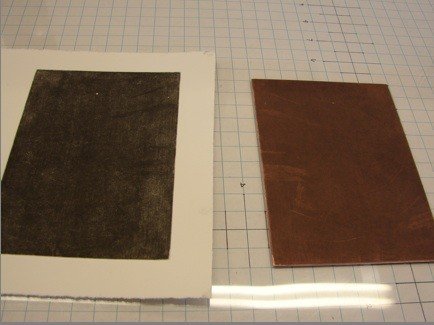 Test Conclusion
The proof had a lot of noise; there seemed to be more white dots than black dots, creating an overall grainy appearance. Aside from lighter areas and variation, the aquatint was successful. The marks made with the gloves printed much darker. 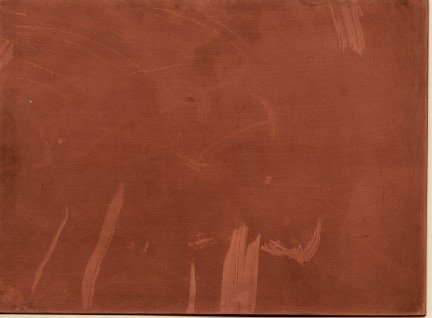 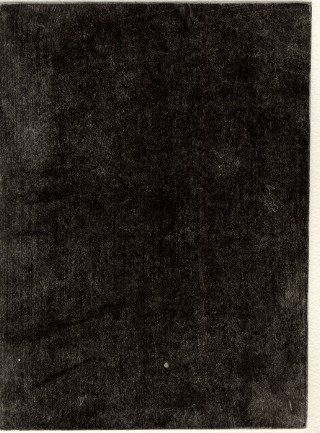