Test Summary
This test seeks to determine how a Z-Acryl aquatint reacts to the Copper Sulfate Mordant. It will also determine how well the Z-Acryl holds up in a step etch test using either a Sharpie or lithographic crayon as a resist.

Plate Preparation
The plate was degreased with soy sauce that was rubbed onto the zinc plate using a piece of rolled felt, rinsed and then dried with a clean rag and blow dryer. I applied a Z-Acryl aquatint across the plate following the studio’s basic aquatinting procedure. I used Sharpie and lithographic crayon to create two lines across the plate’s surface that should last the entire test. The lithographic crayon was simply a straight line but the sharpie was a curly wavy line. In addition to step etching the plate in 2 minute sections I also painted small symbols with Z-Acryl. The purpose of the symbol was to preserve the tone of the previous etch and see the difference in value between two minutes of etching. The plate was allowed to sit for one week before placing it in the Copper Sulfate bath.

Etching Notes
The Copper Sulfate Mordant consists of 50gm salt + 50 gm copper sulphate + 1 liter H20 stored in a plastic lidded container. I etched the plate vertically in a plastic file bin. I used a plastic letter holder that fits into the file slots to keep the zinc plate in place during etching. At first the Copper Sulfate was dark blue but after I stirred the bath it turned cloudy aquamarine.

Timed Application of Mordant
In the first minute the zinc plate was covered in a reddish brown sediment and the Sharpie line looked faded. I changed the water tank and that solved the problem. Every two minutes I removed the plate from the mordant and placed it in a bath of water at room temperature. I removed the plate from the bath and allowed it to air dry before applying stop out. I applied Z-Acryl stop out solution to areas that I no longer wanted to etch. The stop out air dried for 20 minutes and I placed the zinc plate back in the mordant bath. I repeated this same process for a total of 15 minutes. The etch times are indicated on the print proof below.

Removal of Grounds
The grounds were removed using a stripper bath of Arm & Hammer Washing Soda and water (100 grams/1 liter). I used Simple Green and a rag and scrubbed at the ground until I removed all the Z-Acryl.

After Bath Evaluation
It looks like the edges of my plate were not adequately aquatinted because little detail is evident. 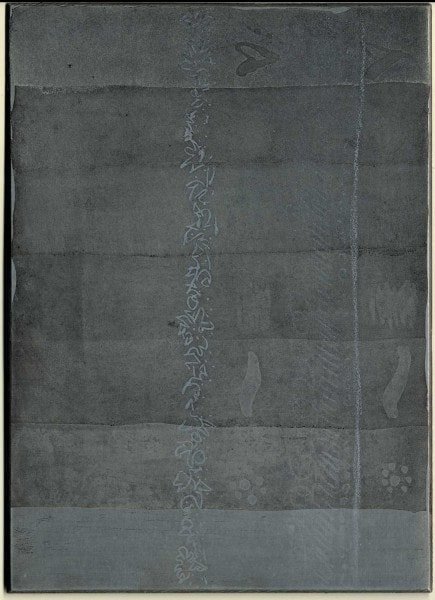 Test Conclusion
I noticed dark lines between the steps of each etch time. Maybe when I applied the Z-Acryl Stop Out it removed some of the aquatint and caused these areas to etch dark. 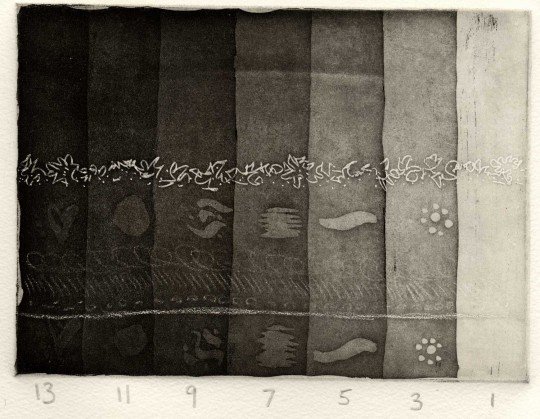