Procedure:
We began by setting up two containers with 10 tsp Future floor wax in each. We then added 1.5 tsp of GAC-100 to mix #1 and 1.5 tsp of GAC-200 to mix #2. The Future floor wax and GAC-100 mixed easily and appeared more diluted than the mix with GAC-200. The GAC-200 did not mix well with the Future floor wax and began to create little clumps immediately. After 5 minutes, we noticed that the bottom of the GAC-100 mixture had a few clumps as well, but they were small and didn’t seem to be floating in the liquid. We finished adding all of the other ingredients to both mixtures, but decided only to spray mix #1 because of the clumps in mix #2. We sprayed mix #1 through the Badger airbrush on finest possible setting onto newsprint. The plate was sprayed at a distance of approximately 6-8 inches with approximately 15 passes. It was set to dry in the drying box for 20 minutes, then removed and sat grounded in our drawer for one week before etching. It was then step-etched in 37 degree baume ferric chloride. The plate was stripped first with the stripper bath and finished with SoySolv II spray. It was then printed two times. 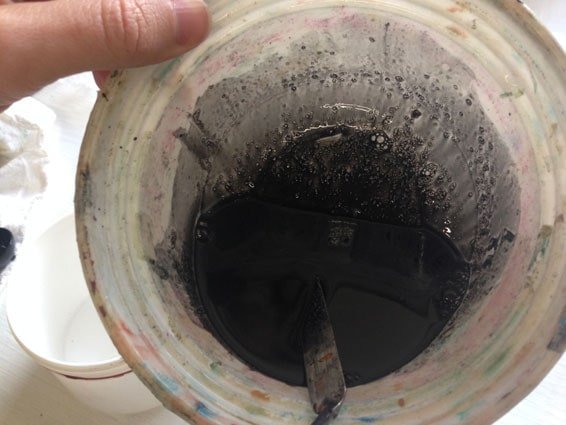 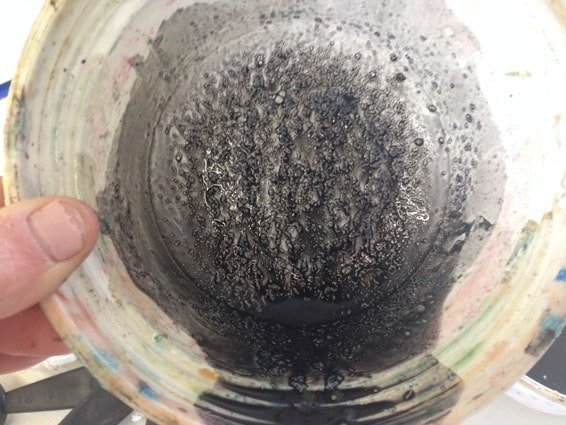 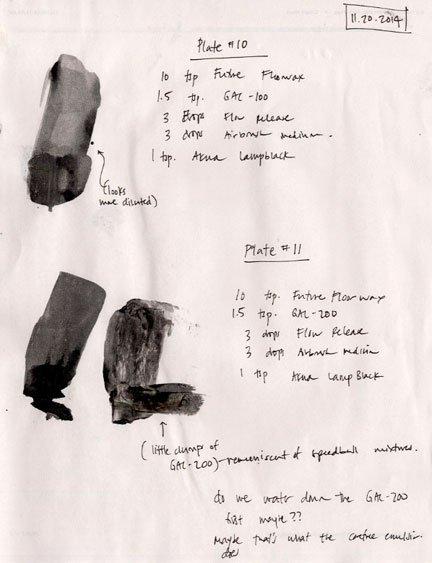 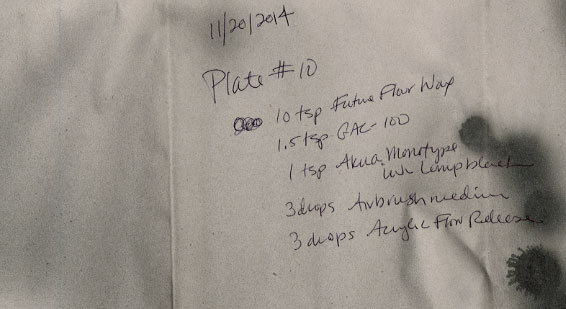 spray of mix 1 onto newsprint

The Mixture
After the mixture sat for 5 minutes, we noticed that the bottom of mix 1’s container had some small clumps. However, the mixed liquid and the spatula when dipped in the mixture seemed very smooth and integrated. The viscosity of the mixture resembled Z-Acryl. It sprayed a fine, clear aquatint on the newsprint, but we found that our plate had a few large dots when we took a close look at it. We had not noticed any sputtering from the airbrush, which would indicate that it was not due to a clog.

Stripping
This plate was reasonably easy to strip. It sat in the stripper bath for approximately 15 minutes, and no SoySolv II was needed.

Printing
We printed on a Takach press using 2 sizing catchers at 5.5 pressure. Ink: Charbonnel #55981 oil-based etching ink with 2 drops 00 plate oil. Paper: Hahnemuhle copperplate white. Even thought the aquatint was somewhat difficult to see when sprayed, it showed up well on the plate during the etching process. The prints had a dense fine tone, despite a few larger white dots that we knew had occurred from the airbrush spray. Overall, this mixture seems like it could be comparable to our earlier Speedball screen filler mixture (plate #3), and also to Z-Acryl. 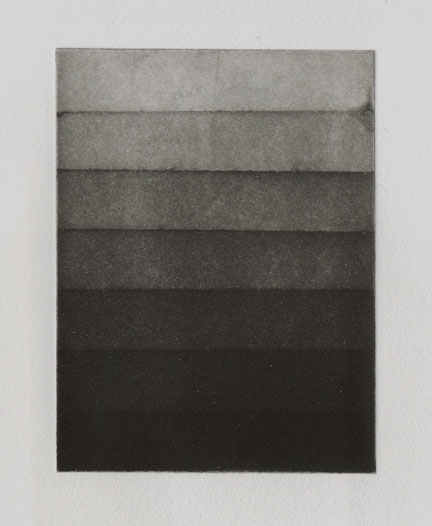