We began this experiment by doing some computer research. We found two links that were helpful to us; the first link  is to a website that outlined an experiment that was making a hydrophobic bioplastic, and the second link is to a video that outlines how to make your own bioplastic. We referenced the recipe used in the first link to create our own silicon dioxide bio plastic using silica powder as our hydrophobic ingredient. We discovered that silica powder is safe because it’s food grade and it’s only significant danger is inhalation.

We started by halving the recipe, taken from the first link; we used 24 g corn starch, 157 ml of water, 4 ml of vinegar and 4 ml of glycerin mixed with 9.45 g of silicon dioxide powder. Using a hotplate and a double boiler pot we made three different batches of bio plastic using the silicon dioxide and one without it. 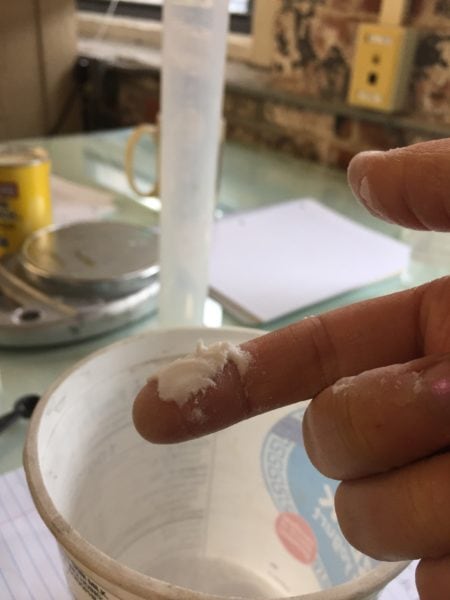 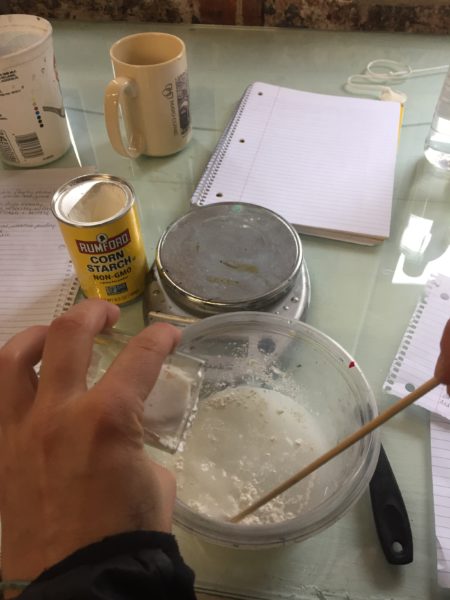 Mixing the silicon dioxide in water 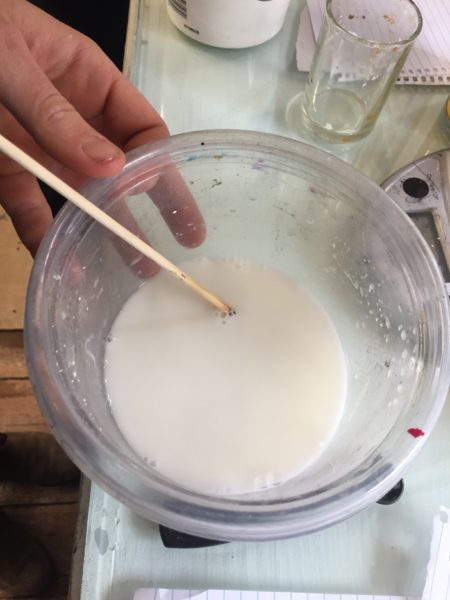 -Batch 1 was brought to a boil so that the mixture was smooth when staring and had a milky white color, then removed from the heat. 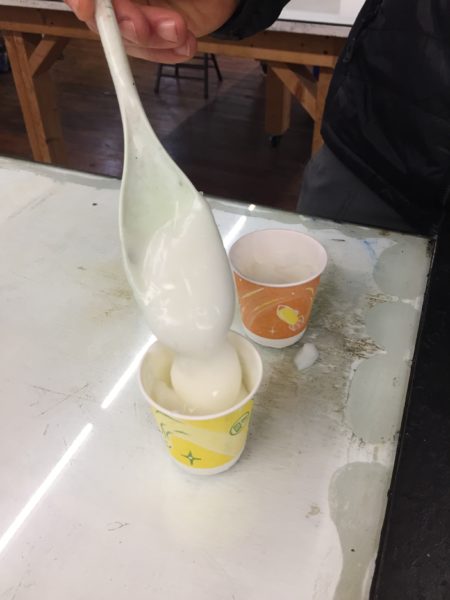 -Batch 2 was brought to a boil and then kept on the heat until it began to become more translucent, the white powder of the silicon dioxide never fully dissolved, but the mixture became more sticky, very gel like, and clear compared to the first. 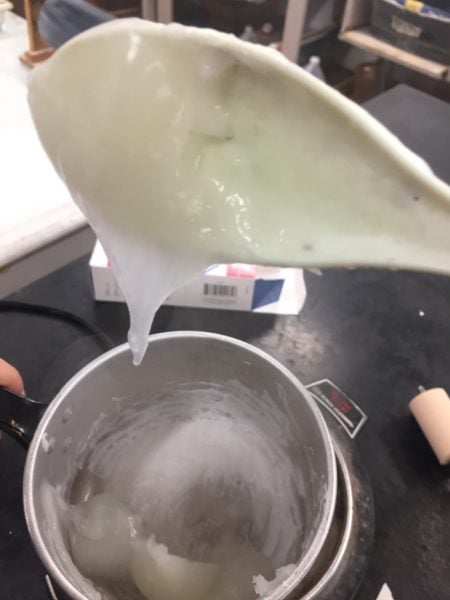 -Batch 3 was brought to a boil kept on the heat as long as batch 2, but then remained on the heat for 5-10 mins. longer in an attempt to see if eventually it would be come clear like the bioplastic seen in the link to the video. It did not become much clearer than batch 2 and it was just as sticky and gel like. 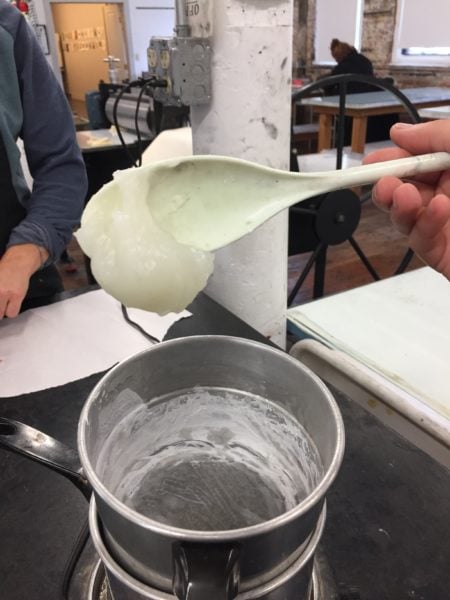 In all cases the sides of the double boiler became coated in a white powdery film as the water evaporated. As we stirred the mixture it was impossible to prevent the white coating to fall back into the plastic mixture, therefore we continuously had a few white clumps in the final mixtures.

We then prepared three copper plates by beveling the edges, applying backing sheets and then de-greasing using first Bon Ami, followed by soy sauce to remove grease and oxidation. We were looking for water to form a smooth sheet across the whole plate surface, which signals that there were no areas where grease was repelling water. All of the plates were lightly buffed using a scouring pad and steel wool to create a matte surface. Once the plates were prepped, we then used a foam brush to apply the three mixtures. Plate one received Batch 1, plate 2 received batch 2, and plate 3 received batch 3. Observations:

-Plate 1: Brushed on two layers. Let first layer dry before applying second. Did not self-level and left streaks, but easy to apply in a relatively thin layer. 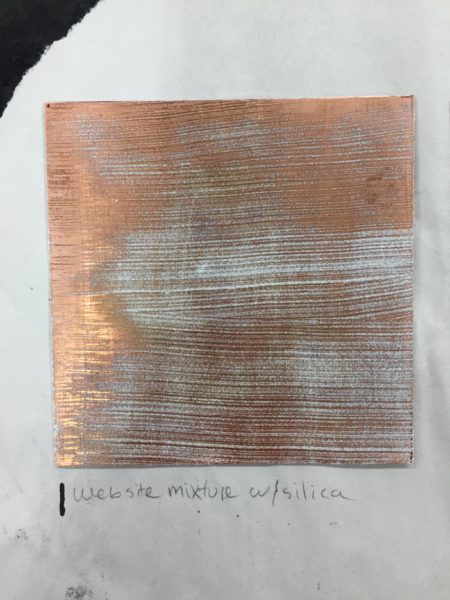 -Plate 2: Brushed on one layer as this batch was stickier than the first making it hard to apply thinly and evenly. Did not self-level. 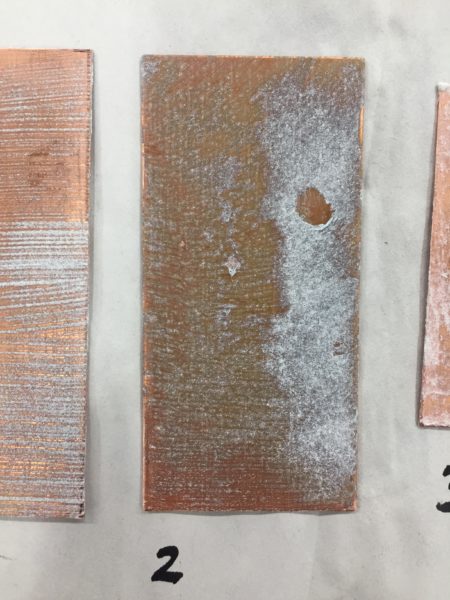 -Plate 3: Brushed on one layer as this batch was sticky like the second. Did not self-level. 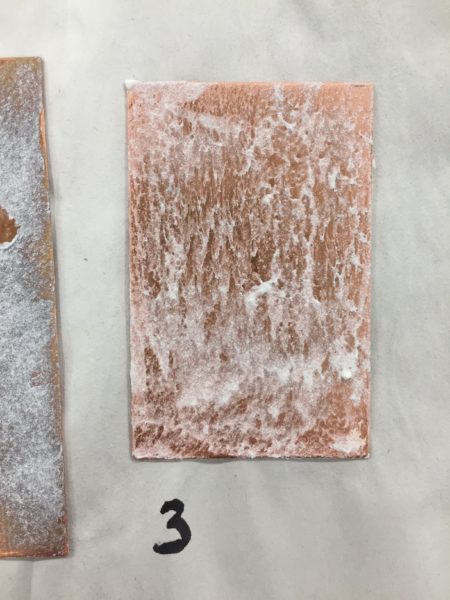 As the plates began to dry, a white, powder-like material started to form on their surfaces. We hypothesized that this was the silicon dioxide that did not dissolve in the water when we were making the bioplastic.

We made a fourth batch, Batch 4, that was just the bio plastic without silicon dioxide. We used the same ratios as listed above. As this mixture heated it did become clear and did not have white film covering the sides of the doubt boiler. The mixture became clear and very sticky, just like the video reference we used. When applied to a plate it was hard to achieve an even thin layer because of its thickness, but it dried clear and no white powder formed. 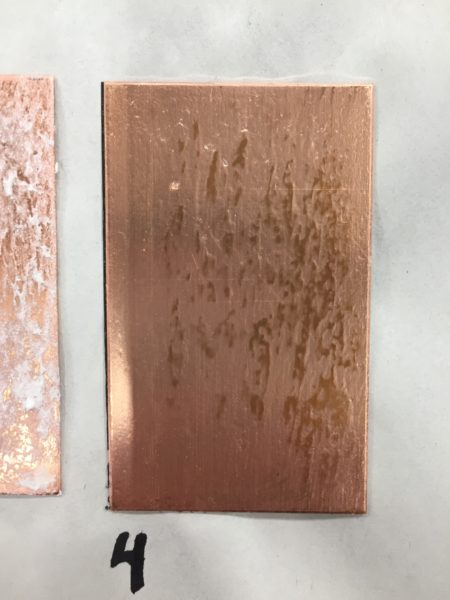 Plate 4, a ground with no silicon dioxide

Test Results-
Test 1: 100 grams of water mixed with 3 grams of silica boiled over heat to see if we could get the silica to dissolve. The silica never dissolved even after the mixture remained at a boil for around 10-15 mins. 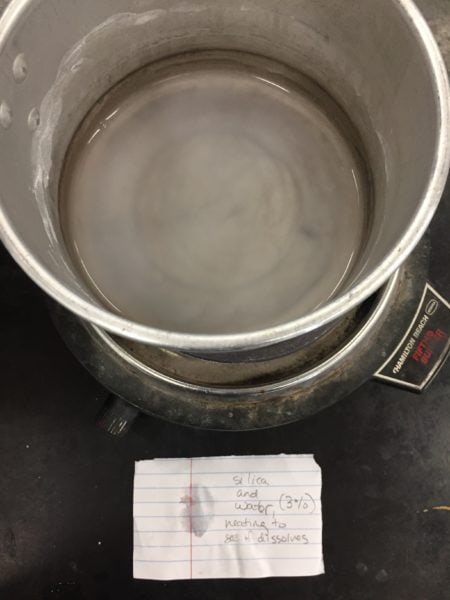 -Test 2: 100 grams of water mixed with 3 grams vinegar. This mixture was initially more clear than the water mixture, so it appeared that the acidity of the vinegar might be dissolving the silica, but as the mixture was heated it was clear that the powder remained climbed on the bottom of the pan as the vinegar evaporated away. 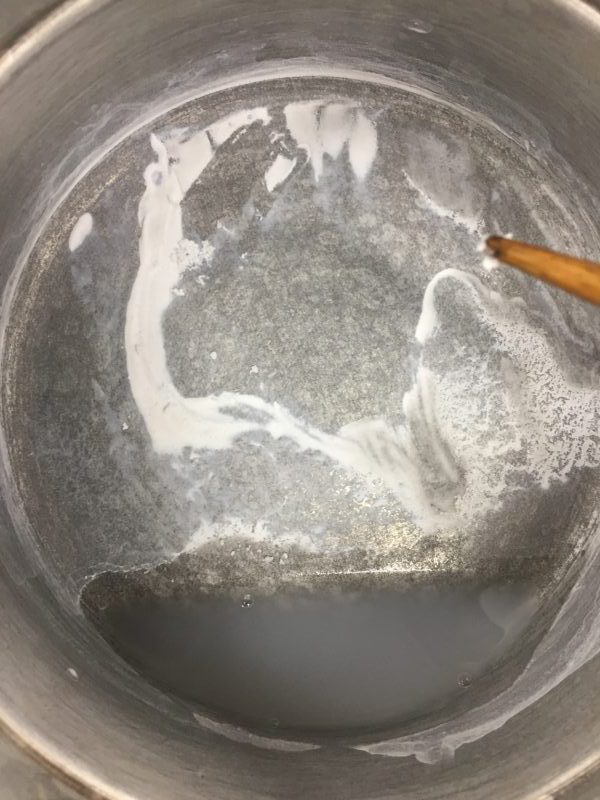 -Test 3: We put neutralizer (sodium carbonate and water) in a cup and added a teaspoon of silicon dioxide to the cup and then stirred the mixture and let it sit for 20 mins. This did not result in any dissolving of the silicon dioxide, the mixture was still cloudy and the powder remained at the bottom of the cup. 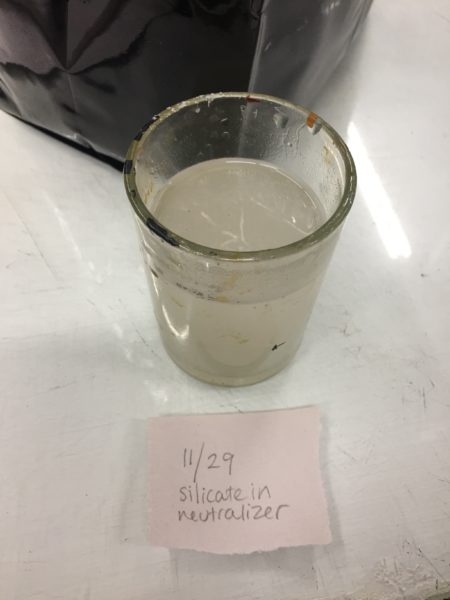 These three tests told us that silicon dioxide cannot be dissolved in water, an acidic solution or a basic solution. We decided that the results of the plates with the silicon dioxide ground were too inconsistent to continue further research.