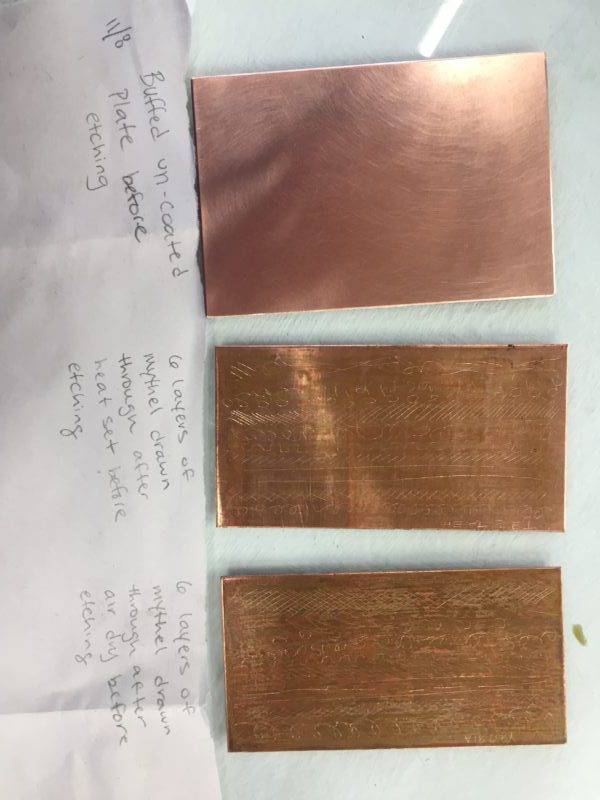 Unetched plates, next to a control plate

Both plates were drawn into using an etching needle once all layers of methyl cellulose were completly done air drying.

For both plates we drew using a light touch and a sharp needle.

The plates were etched in Ferric Chloride bath, with a baume of 39 degrees, for 10 mins. After 10 mins, the plates were pulled out of the ferric to be rinsed very lightly under water to remove the ferric. At this point we observed the texture of the methyl cellulose ground; it was gooey and could be wiped a way with a finger. 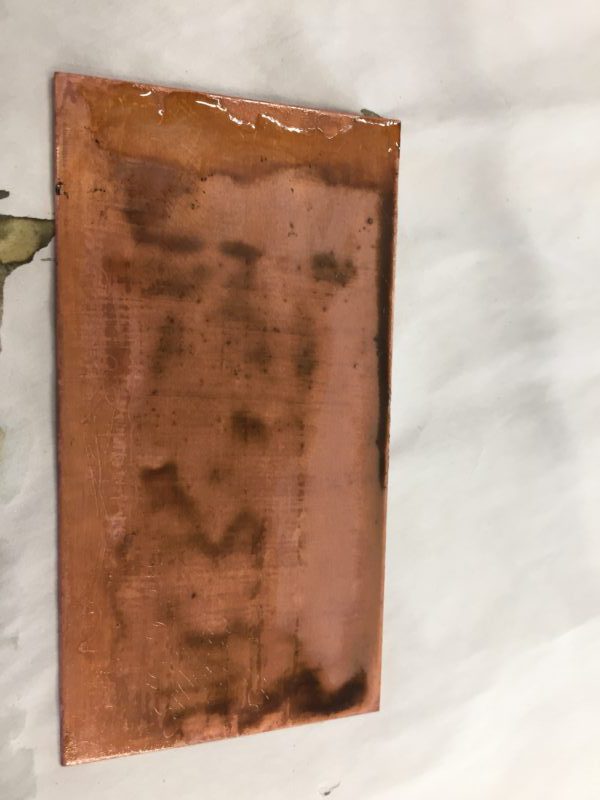 Plate after being pulled out of etching bath 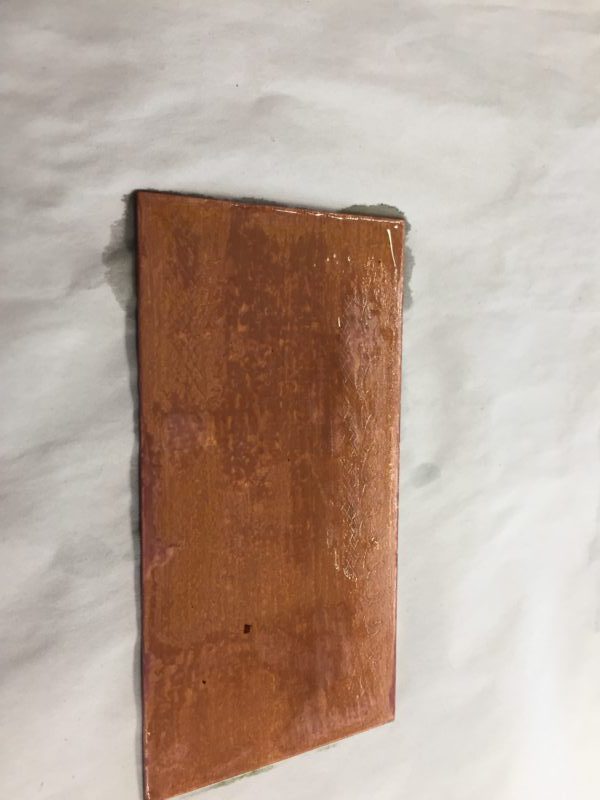 We let the plates air dry until the surface was clear of water, which created quite a lot of oxidization. 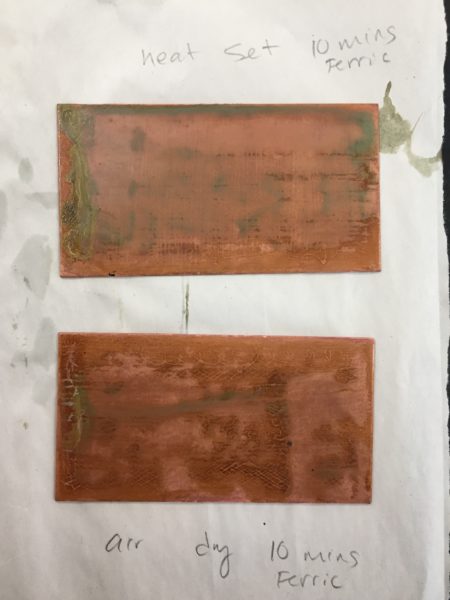 Once dry we painted on ZMP stop out to half of the plate. As the stop out dried, due to oxidization, it began to crack. It took about two layers of stop out to fully cover the plates. We hypothesized that during etching the stop out might crack off due to its fragility. 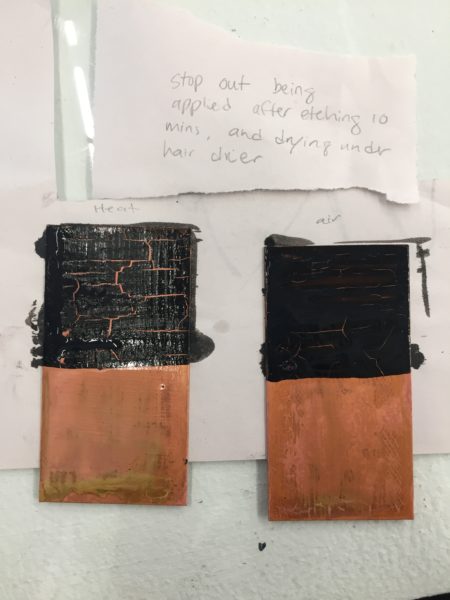 Crackling of the stop out layer due to oxidization 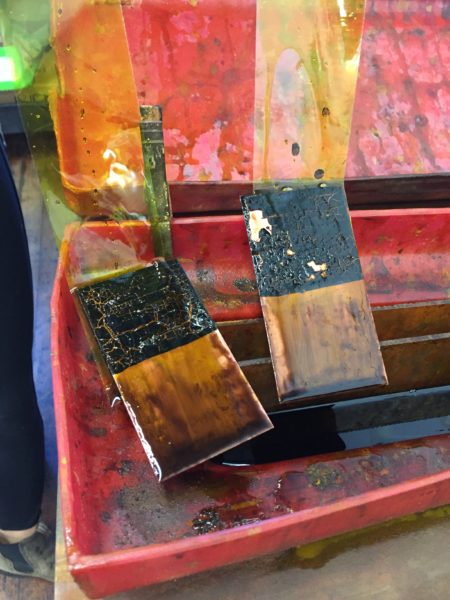 Plates coming out of the bath

When rinsed under water the ground washed off, but some of the ground still had to be scrubbed away using Bon Ami and a rag. Then we printed both plates as follows: 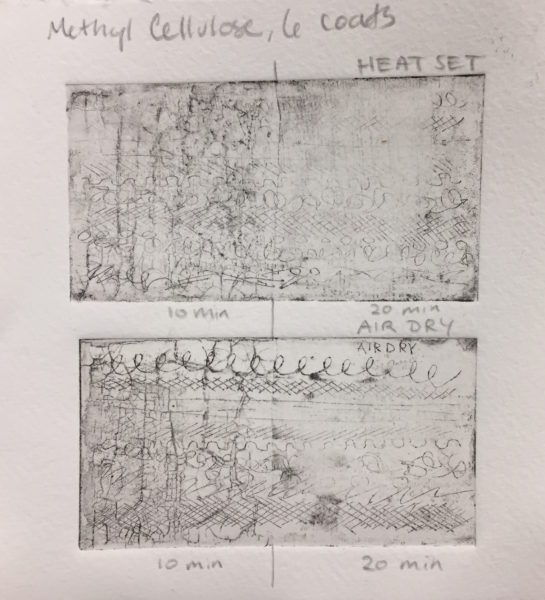 The resulting prints did reveal a couple of things. First, the 20 min etch, on both plates was lighter compared to the 10 min etch on the plates. We hypothesize this is due to the ground breaking down during the step etching process. Second, the heat set plate has line work that is much darker compared to the air dried plate. This suggests heat setting the methyl cellulose will consistently produce better results compared to air drying.

In conclusion, we see no reliable results from our tests of methyl cellulose as a ground. Its water soluble qualities make it hard to step etch and the ground is unreliable when in the ferric. Due to these results this is not a ground we will continue to research.