Zoe’s goal for this image was to look into the potential for the process to be used as a tonal plate to pair with a separate key plate. To test this, she worked off of an old etching and made a new reductive aquatint plate to create areas of tone. 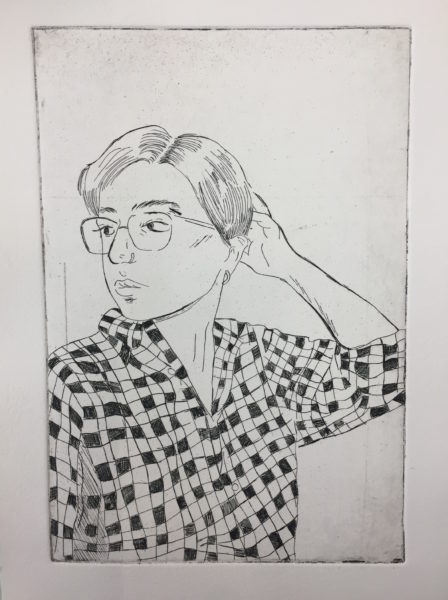 The original image and key plate

For this image, Zoe wanted to keep the figure legible, create areas of value in the shirt (check pattern) and create a textured background.

To start with, Zoe transferred the image onto a fresh double-aquatinted plate. She did so with red transfer paper. 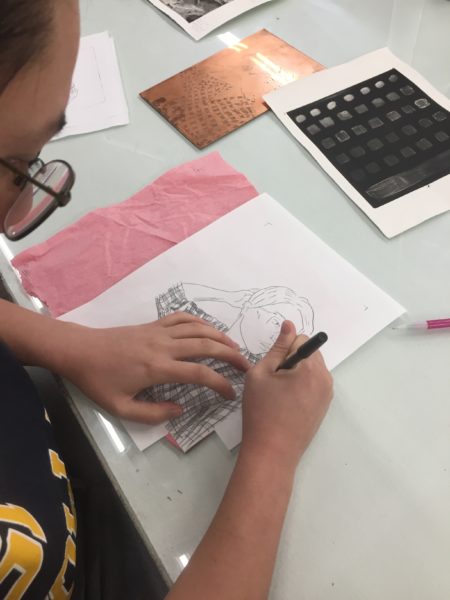 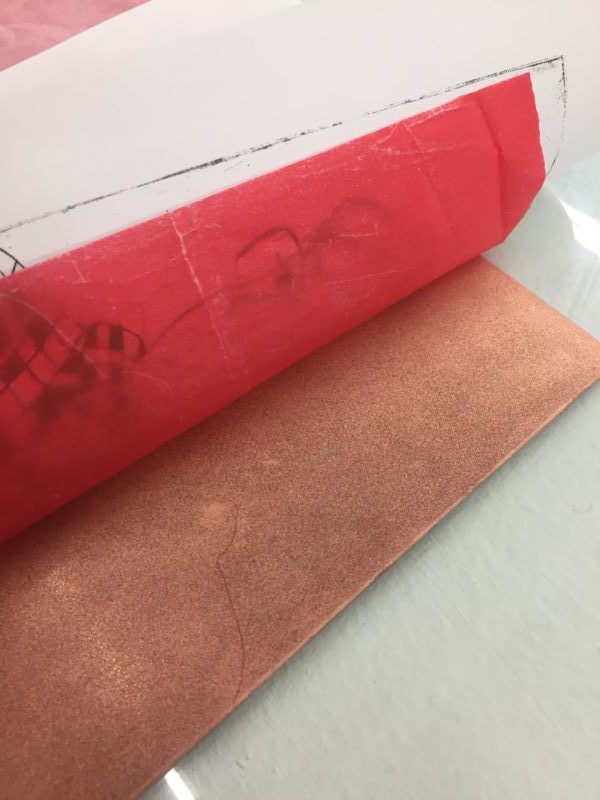 With the image fully transferred, Zoe began to apply acrylic mediums to the plate.

First Zoe applied stop out on the squares of the shirt and on and general skin and hair. 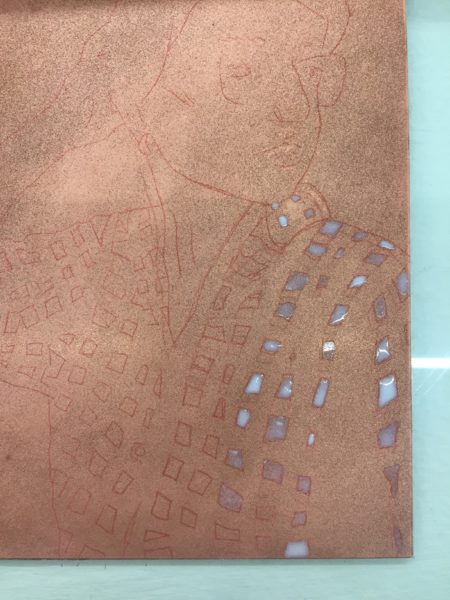 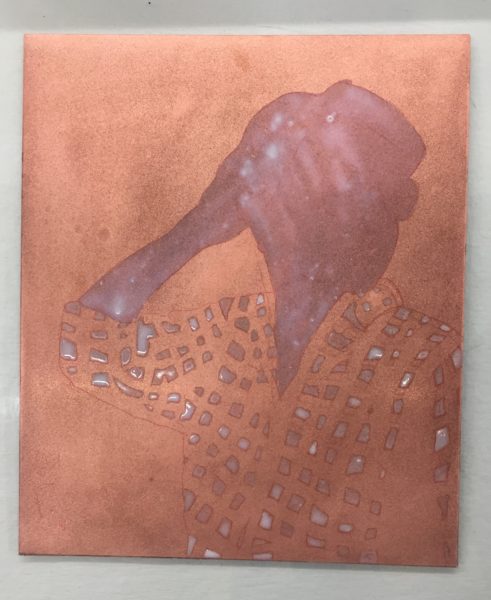 She then applied a second layer of stop out on the face and skin and a third layer on the squares. 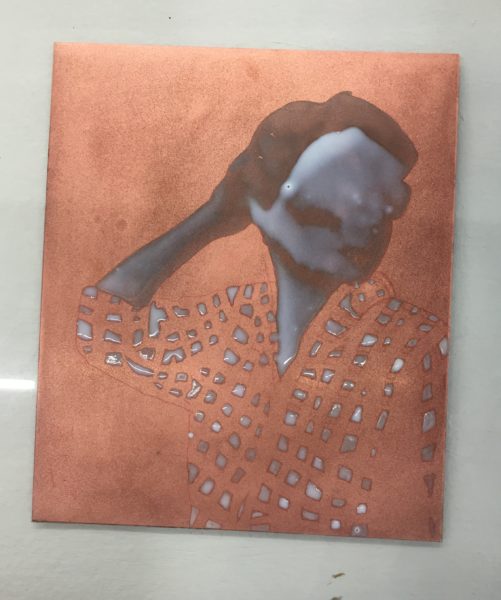 Layers of GAC and stop out were gradually added to build up the white values. 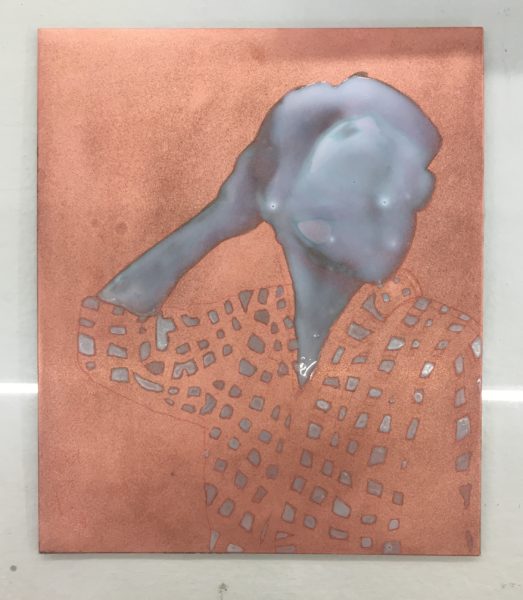 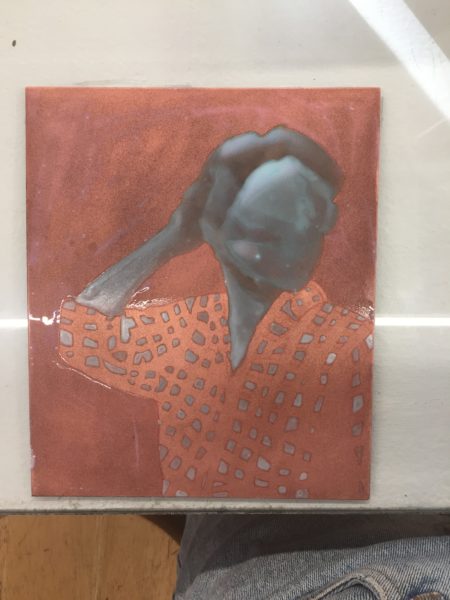 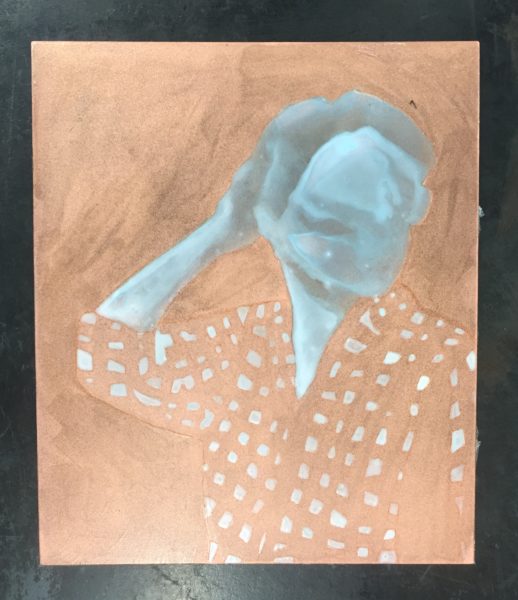 The plate was inked with Bone Black oil based ink, carding on a hot plate and wiping with tarletan and a final hand wipe. 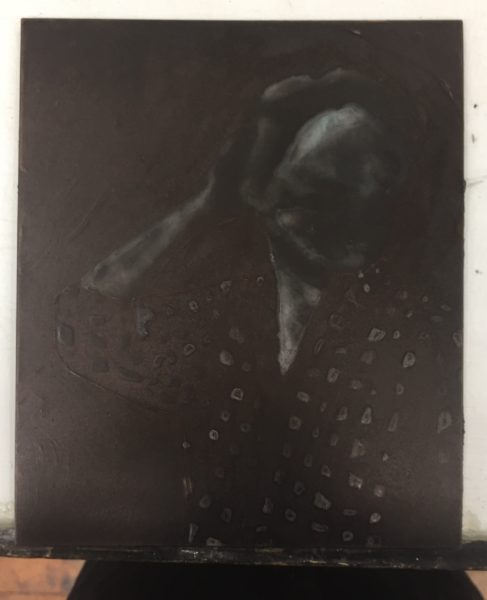 The plate is printed on Hahnemuhle Copperplate. 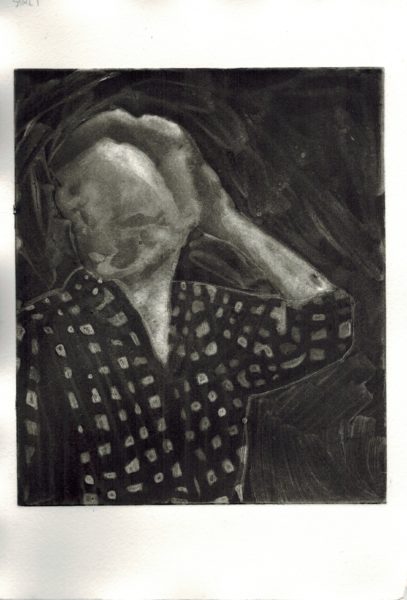 Zoe decided she would like the image on a whole to be lighter in tone, so she worked back into the plate.

She applied a wash of stop out over the whole plate, and then added GAC in the squares, on the face, and tried out some active brushstrokes with GAC in the background. 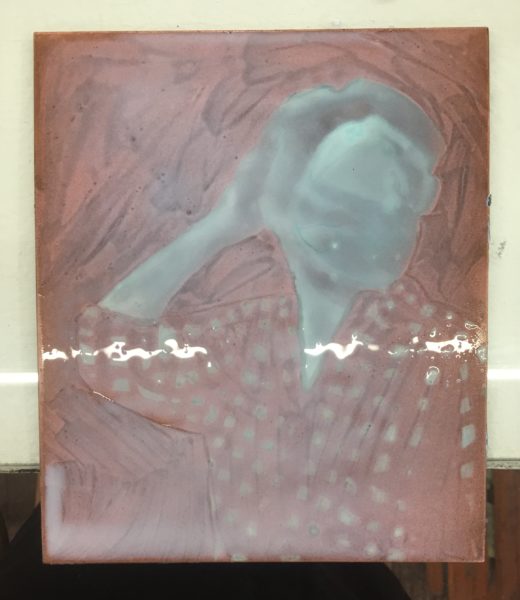 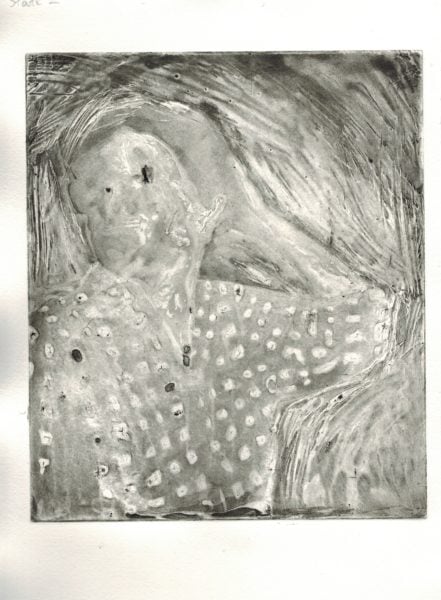 State 2 was much lighter than anticipated or desired, showing how easy it is to go overboard with this technique. We have observed that the more layers of stop out are added, the exponentially bigger the jump in value grows.

Zoe worked back into her plate by sanding down the acrylic with Brillo pads and sandpaper–this will hopefully bring dark values back into the plate. She went over the whole background with a Brillo pad and touched some areas with fine sandpaper, and decided to attempt to bump the contrast by adding a final layer of stop out in some areas of the face and neck. 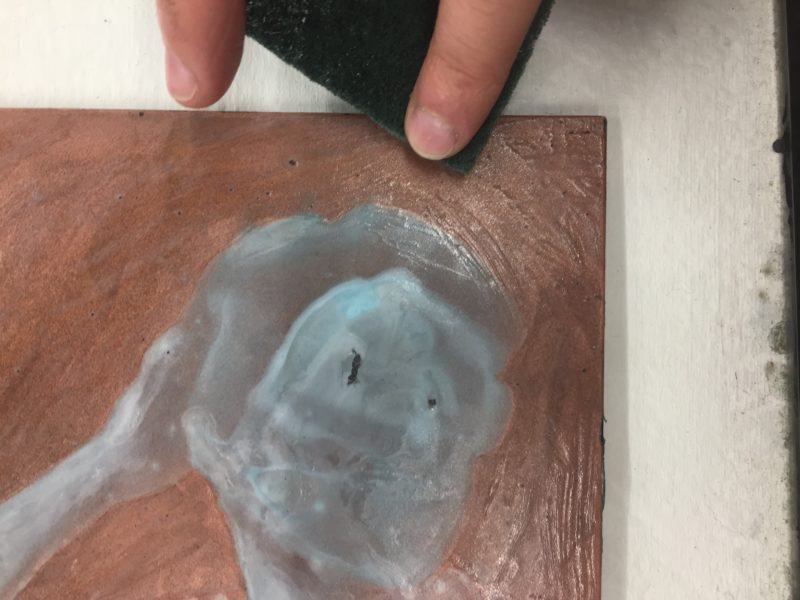 Bringing back dark values with sanding 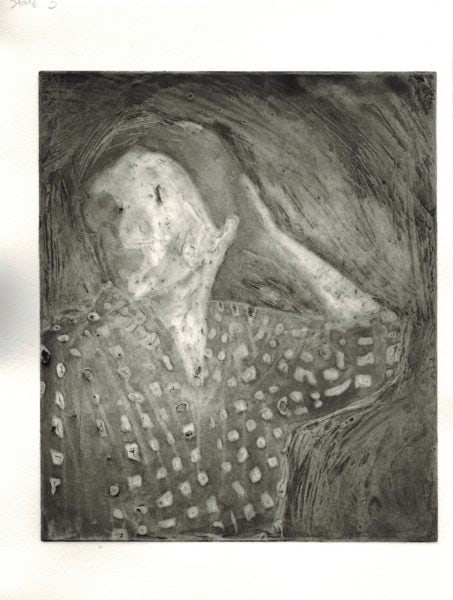 The sanding was a success and the plate was brought back down to a more medium value.

Zoe then registered the plate with her previous etching plate, and although the plates were not the same exact size and the embossment is off, the plates lined up fairly well. 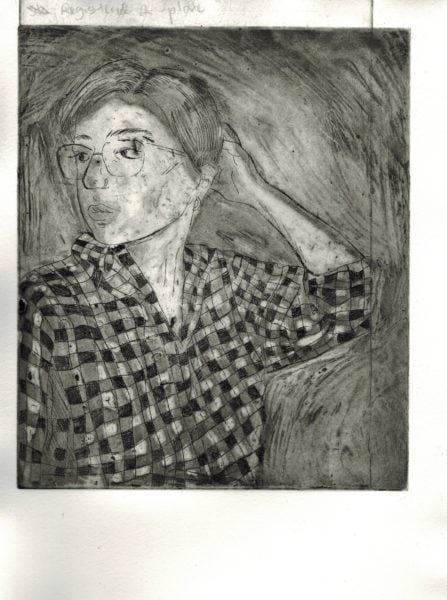 From this test, we learned the importance of building white values slowly. However, the experiment also proved that sanding can be used effectively to bring back dark values (to an extent). In conclusion, this process could be effectively used in tandem with an etched key plate, especially if the plates are the same exact size and registration is precise.

Stripping these plates requires patience and elbow grease; through trial and error we found that the best method for removing the acrylic from the aquatinted plates was as follows.

First we soaked the plate in the stripper bath (sodium carbonate + water), or alternately, under a layer of Estisol 242. 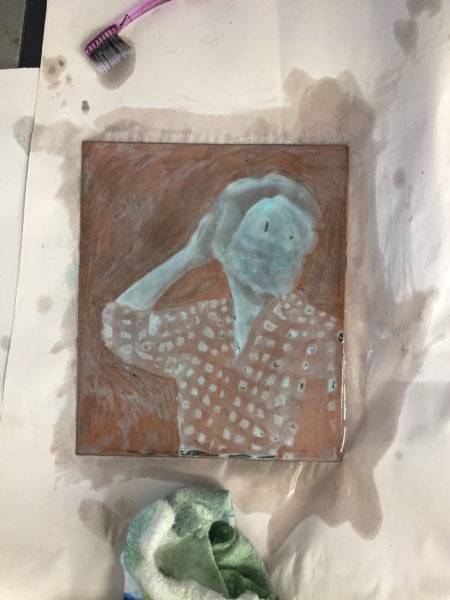 Soaking the plate with estisol

We then poured boiling water over the plate and vigorously scrubbed with an abrasive cloth (we used a scouring pad.) 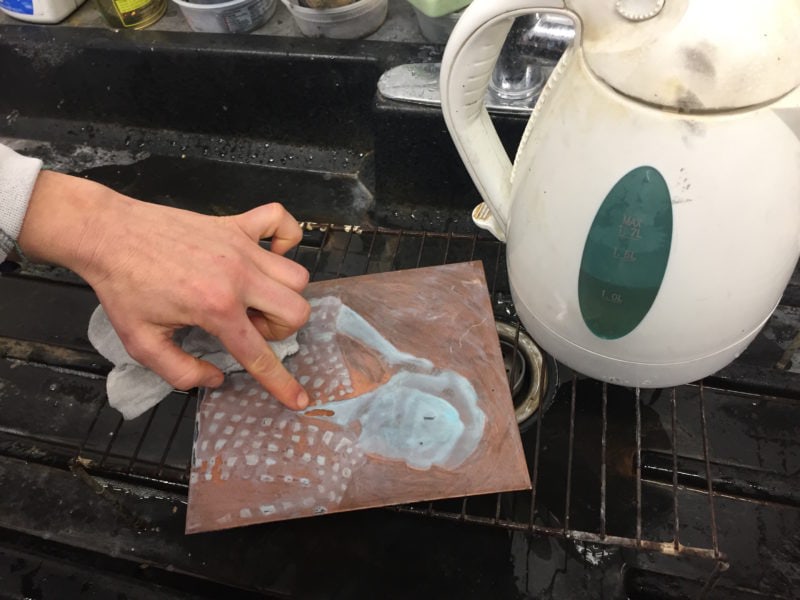 The acrylic slowly began to peel off from the plate, but it took hours to remove most of it. 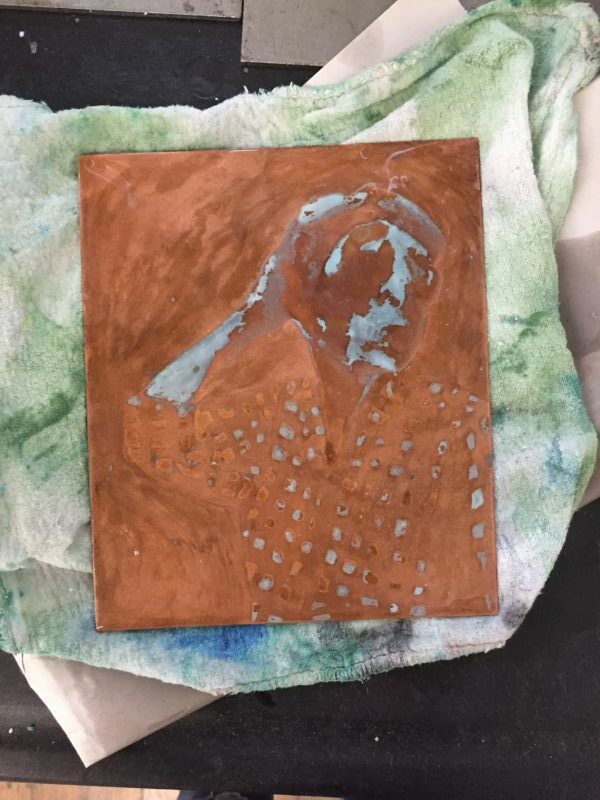 Even after approximately 2-3 hours of rotating between scrubbing with boiling water and letting the plate sit in a stripper, we couldn’t fully remove all traces of acrylic. The plate below shows where we stopped–most of the acrylic is gone, but some faint outlines remain. 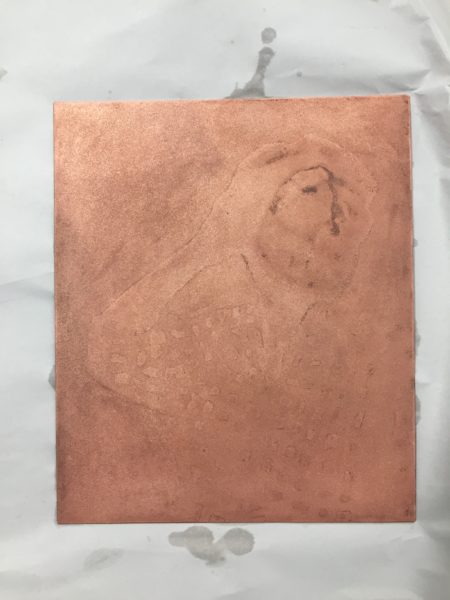 When the proof was first pulled, a slightly lighter tone was visible in the places where a thin layer of acrylic had remained on the plate, but after the print had fully dried it was no longer visible. From this we concluded that this stripping method would be the best one to employ in order to reuse these plates. 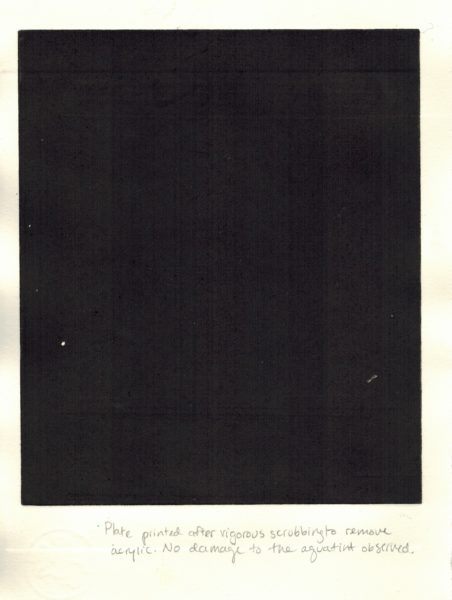