After the previous experiments, we elected to narrow the question of our research: rather than an abrasive used to remove surface damage from a copper plate, is toothpaste a viable alternative to Putz for the purpose of polishing a plate to eliminate plate tone and lend a mirror polish that would ensure a clean wipe?

Setting aside the heavily damaged plates from previous experiments, we prepared a fresh plate of .032 copper (though not mirror polish), beveling and deburring the edges. 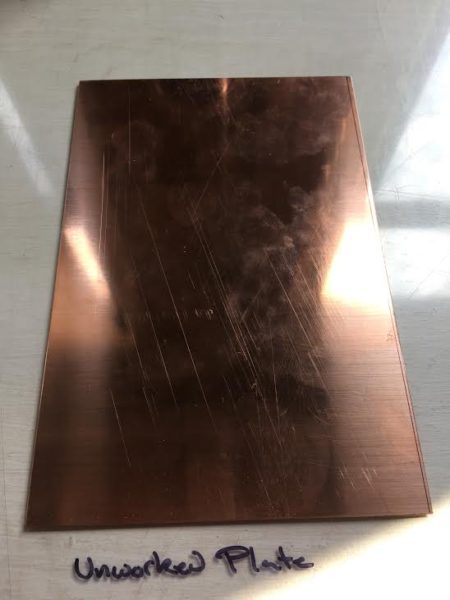 To remove the surface damage we relied on handwork rather than rely on a chemical solution. we first used 2000 grit emery paper, sanding with the grain of the plate for several passes. This had the effect of reducing the surface of the plate down past the shallowest surface scratches. We then went in with a burnisher and 3-1 oil to reduce the deeper scratches that the emery paper could not remove. After burnishing we buffed the plate dry of oil and gave it a couple more passes with the sandpaper. 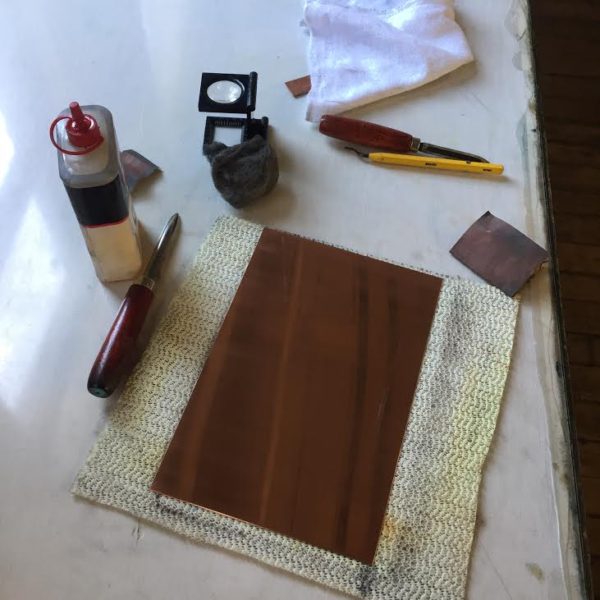 We now have a plate that is free of the majority of its surface damage, and ready to be polished. In order to determine how effective toothpaste is at removing plate tone, we needed to  use the two polishes side by side on the same plate, and compare the plate tone on either half after pulling the print.

Applied a teaspoon on putz onto a dry rag and, on a dry plate, polished the right side of the plate in a circular pattern until the putz turned black and thin. Cleaned with vegetable oil and buffed dry but did not yet degrease. 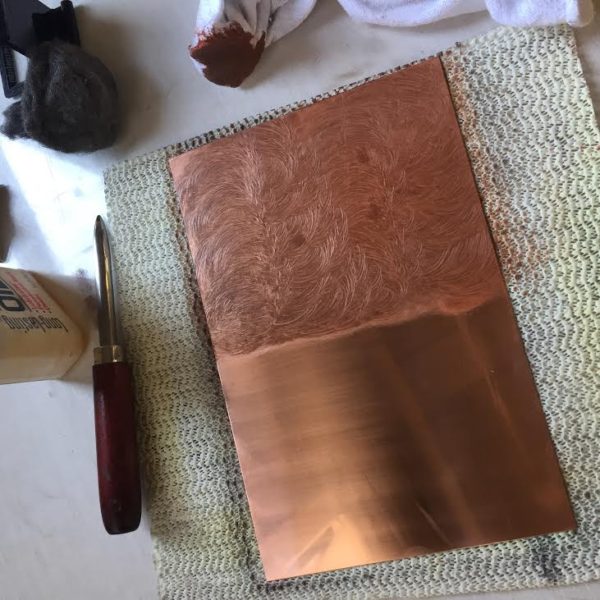 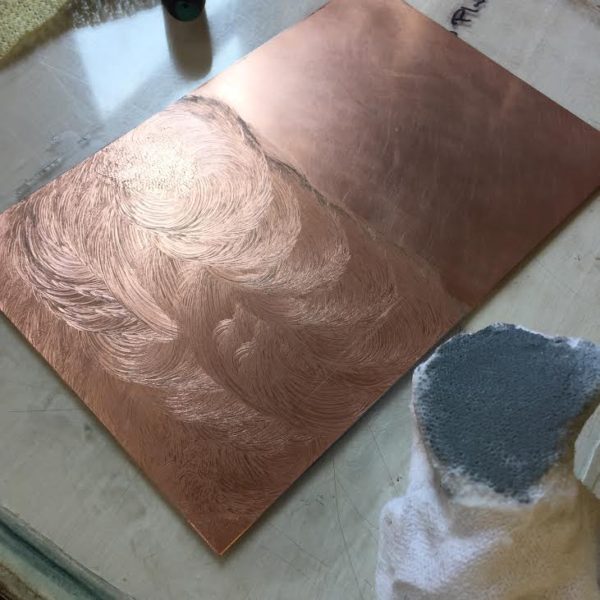 After the degreasing, the surface of the toothpaste side is noticeably less effected than the Putz side (we can still see marks from the sandpaper, burnisher, etc.) but is as bright as the Putz side of the plate, and both are promising. 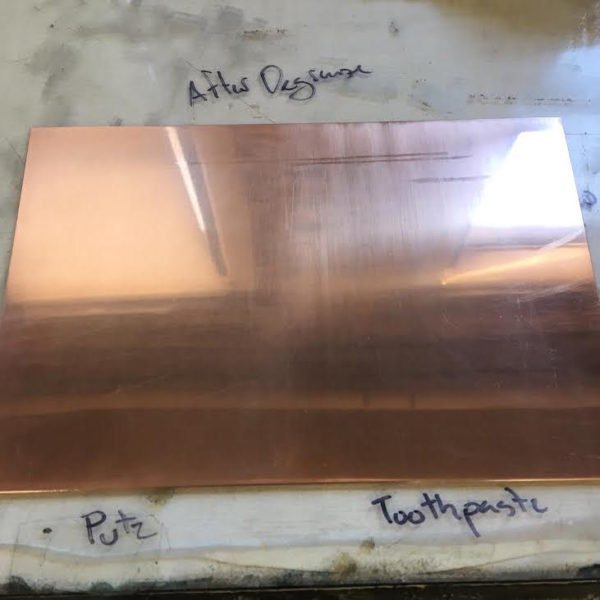 Inked the plate in straight Graphic Chemical 514C Bone Black, wiped using a heavy tarlatan and aggressive hand wiping. There was no appreciable difference in plate tone between the two sides of the plate. Some scratches remain, but only by virtue of being missed during the plate work. No visual evidence of the sandpaper or the burnishing left in the plate. 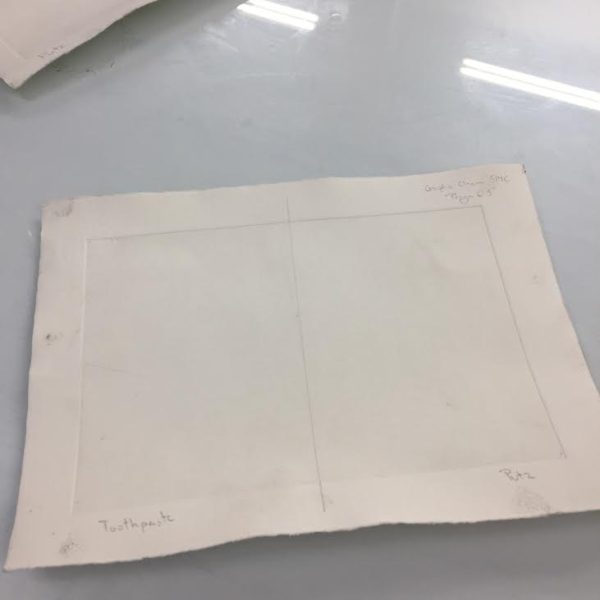 The Graphic Chemical was a relatively stiff ink and came away from the plate pretty easily, and we wanted to ensure that the lack of plate tone was due to the polish, rather than an overwipe, so we re-inked the plate in Charbonnel 55981, which had been giving us some trouble with tone in experiment II. Wiped the plate lightly with the tarlatan, leaving a lot of ink on the surface, and lightly hand wiped. Regardless of the change in ink and wiping methods, the plate continued to print cleanly, with no discernible difference between the two polishes. 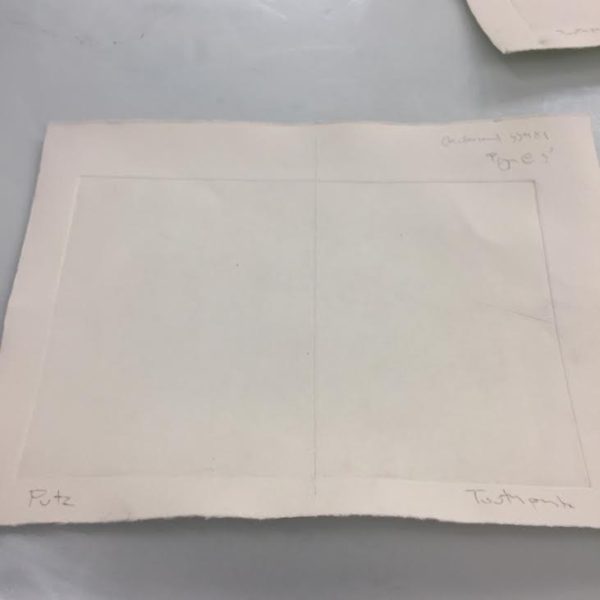 In effect, as a metal polish used for the purpose of removing plate tone and brightening the plate, Toothpaste works as well as Putz Pomade. The plate holds no tone, brightens to a near mirror polish, and prints with no evidence of the previous plate work. After a couple of printings, the two sides of the plate look nearly identical. 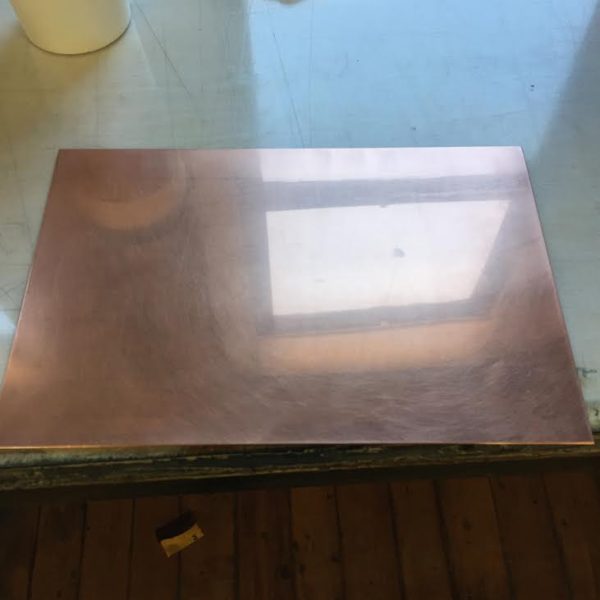