Each un-polished plate was inked in Graphic Chemical Bone Black and wiped: light tarlatan and mostly hand wipe so as the maximize the ink left in shallow surface aberrations. Printed on a Takach etching press onto BFK bright white that had been in a damp pack for an hour.

Once we established a base line of what the plate surfaces were like before being polished, we prepared to test out six different possible polishing solutions on each as follows:

A-Putz Pomade (as a control)

Applied a teaspoon of Putz on a clean rag and polished, applying even, firm pressure, moving in concentric circles crossing the plate in alternating directions until the Putz on the rag became black, and the film on the plate was thin and dark. Cleaned the Putz from the plate with Vegetable oil, and degreased with Bon Ami. The Putz made noticeable progress at polishing out surface scratches, though the deeper marks were still evident. left a slight haze, though this cleared up to a mirror polish after degreasing the plate. 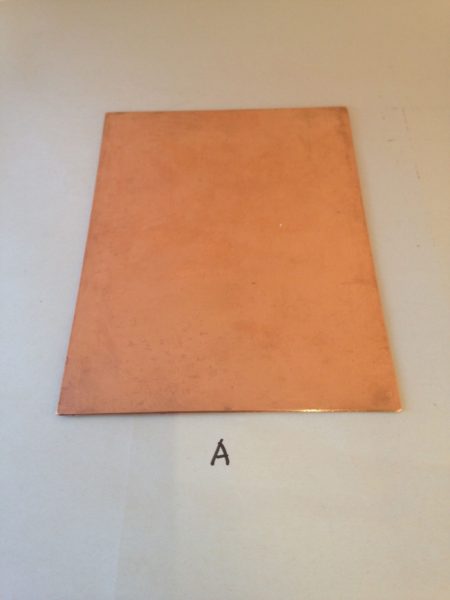 Mixed a solution of .5 cup all purpose flour, .5 cup white vinegar, 1 tsp iodized salt. Applied to the plate with a rag, applying even, firm pressure as before, moving in a circular pattern across the plate. Cleaned with water and degreased with Bon Ami. The plate was significantly brightened, though little had changed in the physical quality of the plate surface. 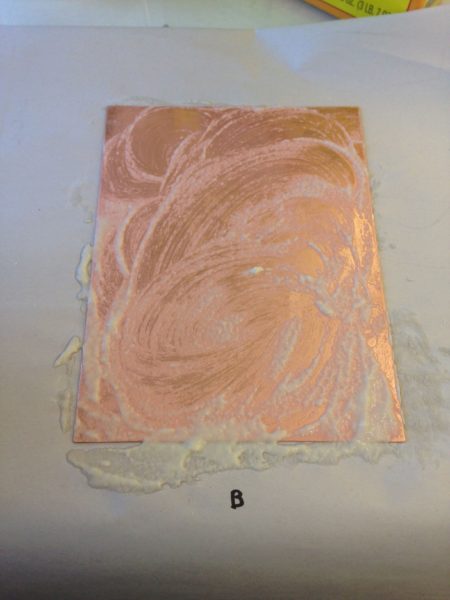 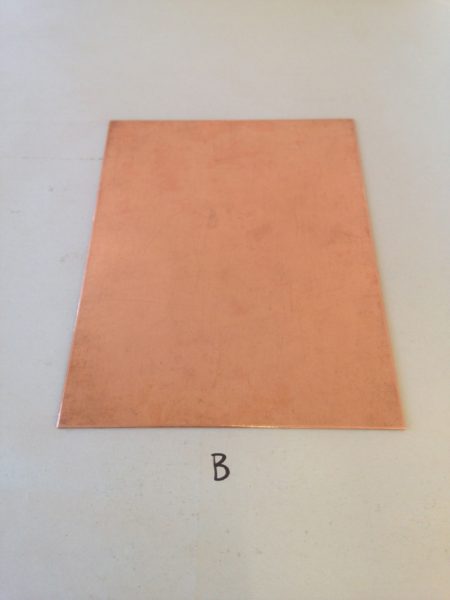 Used the Gerryflex dry on the plate, rubbing the copper vertically and horizontally in a grid pattern, covering the plate 5 times in all. Leaves behind dust from use, dark like the residue removed from the copper by the Putz and the Toothpaste. However, its particulate nature might be a concern. Cleaned with Water and degreased with Bon Ami. The plate had been brightened, though to a hazy, rather than a mirrored surface. The abrasive marks from the Gerryflex are clearly evident, giving the plate the look of brushed metal. 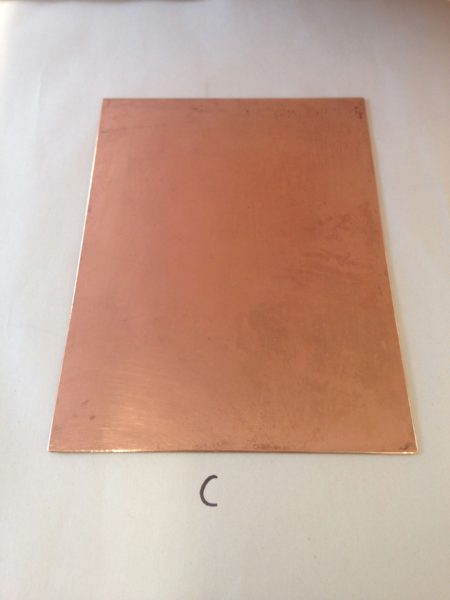 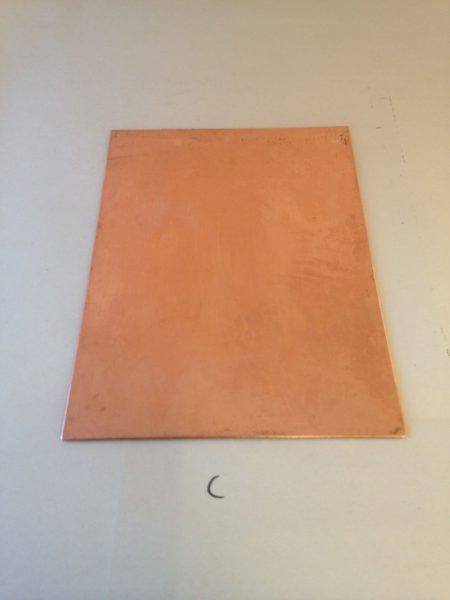 Applied a tablespoon of toothpaste to the copper with a rag, worked in a circular pattern crossing the plate, until the toothpaste, like the Putz, turned dark and thin from the copper. Unlike Putz however, Toothpaste does not maintain its viscosity as it is worked, and the film on the plate dries and becomes increasingly difficult to manipulate. Cleaned with water and degreased with Bon Ami. The plate is noticeably brighter, and some of the surface damage seems to have been polished out. 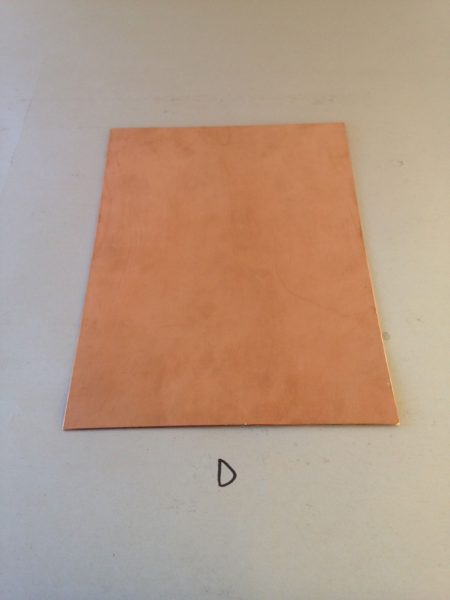 Mixed a solution of baking soda to water at a ratio of 3 parts baking soda to 1 part water. This resulted in an almost crystalline substance, rather than the paste that we were looking for. Attempted to apply to the plate in the same manner as the Putz, Toothpaste, and Flour mixtures previously, but it was not workable and began to scratch and damage the plate. 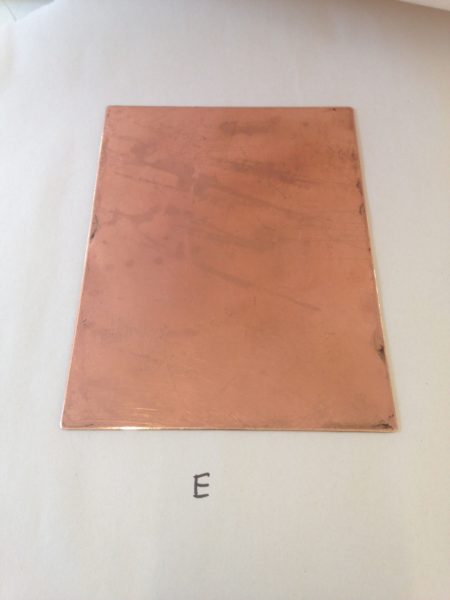 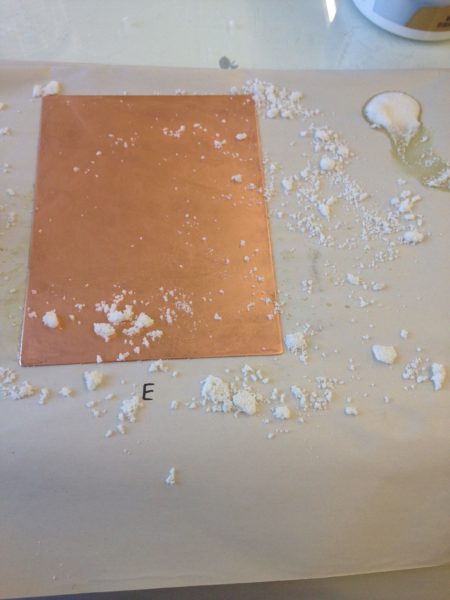 In initial application, worked the plate with the sandpaper in circular motions: as with the Gerryflex, this produces a dust. The plate was left visibly hazy, similar to the Gerryflex again. On a separate plate outside of this experiment, we applied the sandpaper vertically with the grain of the copper, which was much more effective at producing a mirror finish, though is dependent on consistency of pressure and application across the plate. 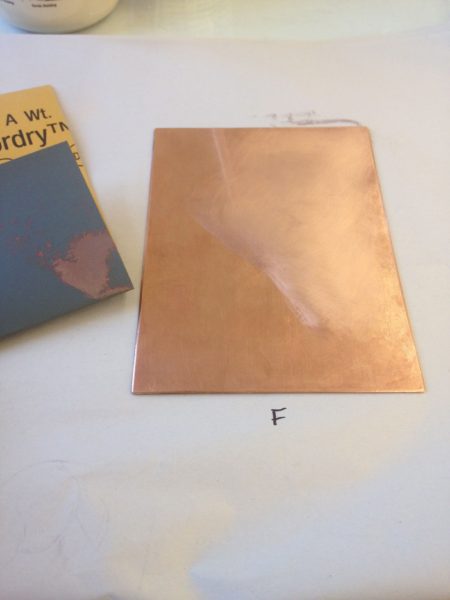 The scratches and general marring of the plate’s surface is greatly reduced. Deep scratches print much lighter and smaller defects are entirely buffed out. Plate tone seems cleaner by a small degree, but not significantly.

Did little if anything to polish damage from the plate. Plate tone is heavy, but from the wipe, rather than any effect of the polish.

Removed a lot of damage from the plate surface, working about as well as Putz in that capacity. However, it leaves a linear, grid like plate tone as a result of its own abrasive qualities.

Seems to have some slight effect at removing the lightest scratches from the plate, and prints without plate tone.

Severely damages the plate, scratching it rather than removing scratches. Heavy plate tone.

Buffs out surface scratches well, but leaves behind a heavy plate tone when not applied with the grain.

The Vinegar, Salt and Flour mix and the Toothpaste are effective deoxidizers and work well at brightening and cleaning the copper; however, they are not particularly effective abrasives. The Sandpaper and the Gerryflex are effective abrasives, and work well when used to remove scratches, but dull the plate surface rather than brighten it, and leave behind heavy plate tones that are not assuaged by the abrasiveness of Bon Ami. Putz for the time being seems to be the only mixture that produces both results. Toothpaste however, proves the most promising, as it reacts to the copper similarly to Putz, and its consistency is similar enough to make a transition from one method to the other easy to grasp. However, it as yet lacks the abrasive punch of Putz. We theorize that the abrasive ingredients of toothpaste (hydrated silica) act in a similar way to the Silica carbide found in jeweler’s rouge and Putz, but is perhaps not enough on its own to buff out surface damage on plates. We plan to experiment with adding various stiffeners to the toothpaste to create more abrasive mixes in future experiments.