Originally from New York City, Hochberg attended Boston University’s School for the Arts, earning B.F.A. and M.F.A. degrees. Until a few years ago, her work as a printmaker encompassed most of the traditional forms, including etching, dry point, collagraph, and monotype.
Judy was introduced to polymer plate gravure in 2004. She used this technique to create prints and artist’s books. Her book, Carl’s Life 1906-2005, was selected for the 2007 Boston Printmakers Biennial exhibition and her book, The Transforming Power of Time, was awarded second prize at the exhibit, Press Works at Plymouth State University, Plymouth, NH. In 2005, 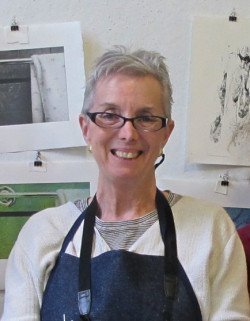 Judy was introduced to digital photography and Photoshop, which led her to create photogravure etchings. In 2008 she created a portfolio of ten photogravure prints, titled Butterflies. In 2009, she completed a commission to photograph the album cover for a CD released by Terry Kitchen, a Boston-based folk singer, using the painting with light technique.

Ms. Hochberg’s work is in the collections of the Boston Athenaeum, the Boston Public Library, the Duxbury Art Complex Museum, Fidelity Investments, the Fogg Art Museum, Hebrew Senior Life in Boston, Wheaton College of Norton, MA and the Worcester Art Museum, as well as several private collections. She is a member of Full Tilt Print Studio (formerly EES Arts) a nonprofit printmaking cooperative in Hyde Park, MA, as well as the Boston Printmakers, the American Color Print Society, the Monotype Guild of New England, and the PhotographicResource Center.