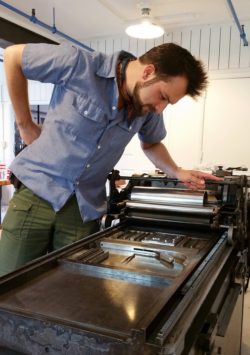 Joe Riedel is a letterpress printer and press mechanic from Northampton, MA.  After receiving his degree in operations management from the Isenberg School of Management at the University of Massachusetts Amherst, he became interested in the craft of letterpress printing, which came from his interest in letterforms and his love of old machines and technology. In 2008 he began an apprenticeship with Art Larson at his shop Horton Tank Graphics in Hadley, MA, which specializes in printing fine press, limited edition books. Here Joe had a traditional learning experience in a very traditional craft, and he developed a classic sense of typography and layout as he learned to hand-set type and print letterpress.  An amateur mechanic from an early age, Joe felt comfortable with the various printing presses in the shop, and was soon taking them apart and rebuilding them to improve their function. The following year he opened his own studio, Pintail Press (named after his favorite duck), in the same old building where both Horton Tank Graphics and Daniel Keleher’s Wild Carrot Letterpress are located. In the following years he has assisted in the production of many fine press books and editions, for publishers such as Michael Kuch’s Double Elephant Press, Barry Moser’s Pennyroyal Press, 21st Editions, Nawakum Press, Two Ponds Press, and several others.  In addition to printing, he also teaches workshops on letterpress printing and press maintenance, and also maintains, rebuilds, and transports presses and equipment for individuals and institutions in the Northeast.