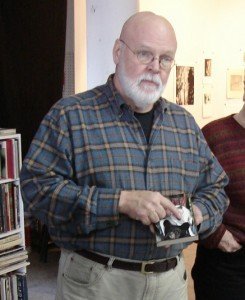 Barry Moser is represented in numerous collections, museums, and libraries in the United States and abroad, including The National Gallery of Art, Washington, The Metropolitan Museum, The British Museum, The Victoria & Albert Museum, The Library of Congress, The National Library of Australia, The London College of Printing, The Pierpont Morgan Library, The Vatican Library, Harvard University, Yale University, Dartmouth College, Cambridge University, The Israel Museum, and Princeton University to name a few. Mr. Moser has exhibited internationally in both one-man and group exhibits. He is a member of the Society of Printers, Boston; an Associate of the National Academy of Design elected in 1982 and made full Academician in 1994; and has been awarded the Doctor of Fine Arts degree by Westfield State College, Westfield, Massachusetts (1999) and Massachusetts College of Art (Boston), and the Doctor of Humanities degree by Anna Maria College, Paxton, Massachusetts (2001). In addition to being an illustrator, he is also a printer, painter, printmaker, designer, author, essayist, and teacher. He is currently Professor in Residence at Smith College where he also serves as Printer to the College. The books Moser has illustrated and/or designed forms a list of over 300 titles including the Arion Press Moby-Dick and the University of California Press The Divine Comedy of Dante. We encourage you to look at his work online at www.moser-pennyroyal.com.