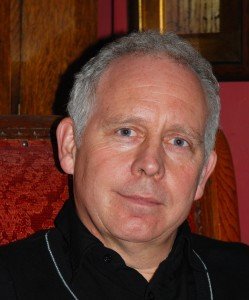 UK Teaching Fellow Andrew Baldwin has a long established career in printmaking, stemming from a family tradition of printers. Andrew was apprenticed to a printing company at 16, moving to the School of Art in 1986 as senior technician.

When Andrew joined the Art Department of the University of Aberystwyth, printmaking processes were traditional and included the use of dangerous chemicals. With a view to reducing these hazards, Andrew attended a non-toxic workshop at Edinburgh Printmakers. Inspired by the possibilities he had seen, in 2000 Andrew began his own research into developing a safer alternative. Out of this research emerged a more versatile, safer etching ground, now known as BIG (Baldwin’s Intaglio Ground).

The ground and the many safer alternative processes have since become successful alternatives to the traditional methods in workshops around the world. At present, there are many Universities in Britain, Canada, USA, New Zealand and Australia using BIG as their preferred safer etching ground.

Andrew has established himself as a successful printmaker in his own right, earning titles such as Welsh Artist Printmaker of the Year 2007 and Most Exceptional Artist at the Federation of British Printmaking exhibition. He has exhibited widely in Britain, Australia, Canada, Hong Kong and the USA. In 2010, Andrew was invited to demonstrate BIG at IMPACT, the International Printmaking Conference in Bristol, and due to popular demand, is returning in 2013 to the International Printmaking Conference in Dundee, Scotland. In his own work he explores themes that often reflect a dark humour.