This event has passed.

This exhibit of works by Suzanne Artemieff, Linda Bills and Katherine Kavanaugh represents the culmination of each artist’s participation in the Zea Mays Artist Mentorship Program. 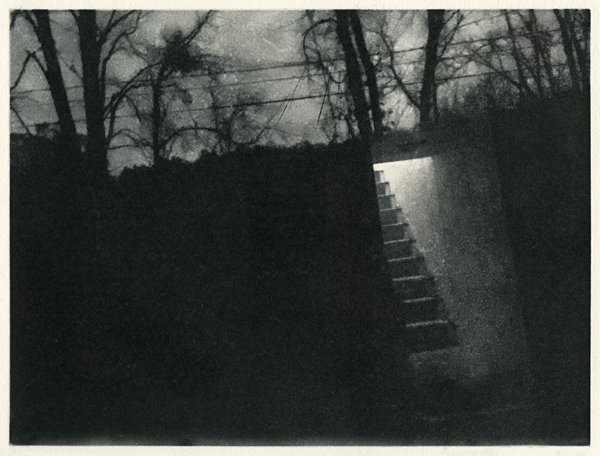 The photopolymer intaglio prints exhibited here were selected from a larger body of work titled Seeking Equanimity.  In this work I try to convey the challenge of finding equanimity – perhaps even beauty – during times of disorientation and fear, perceived crisis.  Each of the prints is made from a single image shot through glass or water such that reflections on the surface intermingle with objects on the other side of the glass or water.  This, I felt, was the closest means to capturing distortions organic to one’s perception.

The process of creating this work itself involved the cycle of finding/losing/re-finding equanimity throughout the inevitable successes and failures.  It represents the challenge of finding balance in virtually everything we do – the Buddhist “middle way.”

Most of the prints were created during my mentorship with Nancy Diessner from September 2019 to August 2021.  Words cannot convey how much I learned and grew as a printmaker during this time.  Nancy not only helped me work through the inevitable obstacles and pitfalls, but encouraged me to seek out the expertise and perspectives of other Zea Mays faculty, who offer an amazingly deep and broad range of wisdom, talent, experience and support.  The mentorship program enabled me to achieve the goal I stated in my mentorship application, “ to gain the experience of transforming an idea into a body of work with the hope that will enable me to work more independently with higher confidence and success.”  A profound thank you to Zea Mays! 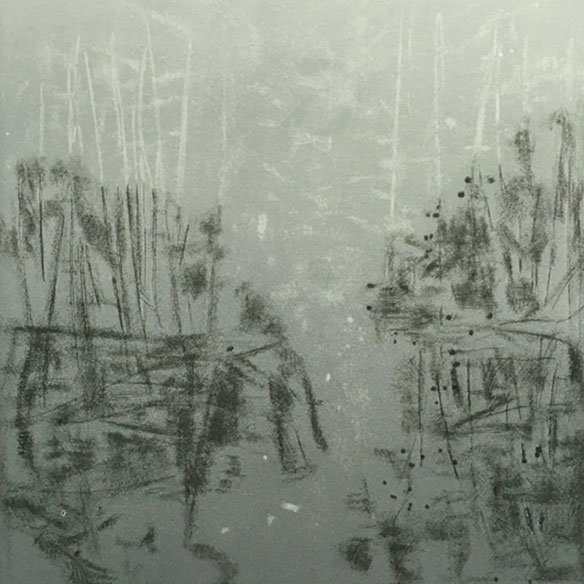 When I applied to the ZMP Mentorship program I’d been away from printmaking for about a year. I felt the Program would kick start things and provide expert guidance. I’d taken a number of ZMP workshops with Joyce Silverstone, who became my mentor, and was well aware of her hands on knowledge and sensibilities. From our first meeting she got me going in the right direction. Like most artists, what inspires me is deeply personal. But I found it easy to open up to Joyce and share what I thought of as my biggest hurdles and shortcomings. She appreciated my honesty and that became the foundation of a very productive mentor/mentee relationship. Over the months Joyce looked, listened, questioned, guided, suggested and offered many next steps and alternatives for whatever I was working on. She was available to answer my many questions and pointed out easier or better ways of doing things.


Recently I began looking over the notes Joyce had emailed after each of our sessions. In doing so I was reminded of where I’d begun and what I’d accomplished. Somewhere along the way I realized I’d been missing the mark and that my visual language needed to go deeper. For me the extraordinary world of nature is essential to my life and exists as a felt presence. It’s not enough that I merely take a walk in the woods. If I want to make work that embodies my connection with that inner experience, I need to spend time there. In the woods, in the marsh, in the day and in the night. I need to sit and listen and discover, ask questions, make marks, draw and get to know it in a deep way. Only then will I have any chance of discovering the work I’m wanting to make.


The prints in this exhibition are examples of brief steps along the way. There will be a lot more delving, in the woods, in the day and the night, after rain and on sunny days. I wish to thank Joyce Silverstone and ZMP for this invaluable Mentorship experience. 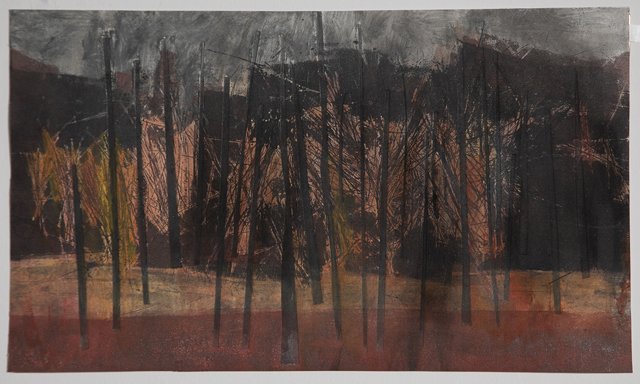 In the Fall of 2019 I began a series of mono-prints titled “Ravaged” which was a response to the ferocious devastation caused by world-wide wildfires.  What began as a series of prints to memorialize the destruction and after-effects of the forest-scape, soon turned into more potent, emotionally-charged imagery.  As the fires continued to rage, I began to use actual fire and smoke in the work to show the chaotic frenzy of a world on fire both environmentally and politically.

After many versions, the “Ravaged” series played itself out. And soon the pandemic took hold.  Fortunately for me, the physical and emotional restrictions of the pandemic aligned with my mentorship with Zea Mays faculty, Joyce Silverstone. Joyce’s intuitive questioning and steady, positive support allowed me to move into a series of transition prints which became the “Earth and Sky” series. I think of this series as the calm following a storm. They are reflective and seem to have a resolved dynamic between two powerful earthly forces.

Many thanks to Joyce Silverstone for her patience, her insight and her deep commitment to the printmaking processes. She is an inspiration.