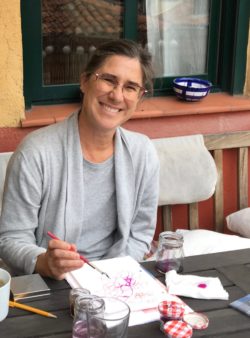 Marjorie Morgan has spent most of her life creating work in a variety of media (dance, music, theater, performance art, painting and printmaking). She grew up in Southern Vermont, and then moved to Ohio to study dance at Oberlin College, where she was awarded the Louis Sudler Prize in the Arts. After returning to New England, Marjorie embarked on a 27 year career dancing, choreographing, and teaching dance and movement in Boston. Between 1996 and 2009, she received ten “Best of Boston” awards from Boston critics, and a Tanne Foundation Award in the Arts. She was seriously injured during a performance in 2011, and since then has focused her creative skills in the field of visual arts. She has been a selected artist for the Northampton Biennial in 2015 and 2017; and had a print selected to be part of Stand Out Prints at Highpoint Center for Printmaking in Minneapolis, MN in 2018. As a master teacher, Marjorie has taught for over 35 years with students ranging from age of 2 to 87 at preschools, art schools, camps and Colleges. She is committed to green printmaking processes, and has been experimenting with natural pigments and inks for several years. Her prints are created almost exclusively with Akua inks and/or her own handmade natural inks. Marjorie happily resides in the beautiful hills of Colrain, MA with her wife, visual artist Whitney Robbins, and their very spunky dog, Maisy.