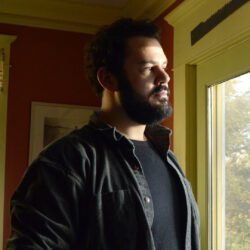 Kevin Pomerleau has been involved in printmaking since 2010 when he first stepped into a printmaking studio as an undergraduate at Holyoke Community College. After acquiring a BFA in Printmaking from the University of Massachusetts Amherst, Kevin completed the Zea Mays printmaking internship and has been involved at the studio ever since. During this time, he has developed and worked towards mastering his knowledge of assorted intaglio etching techniques on copper and incorporates these skills into his work.

Kevin’s work has been featured at the Editions/Artists Book fair in New York and has been included in many prestigious exhibitions and collections.  Previously having spent time instructing high school printmaking and ceramics courses, Kevin works as the Visual Arts Technician Specialist at Smith College.  Kevin resides in Northampton.