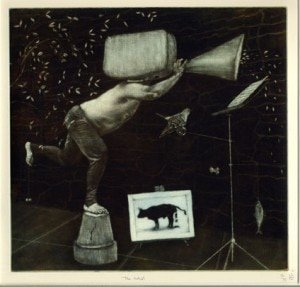 Zea Mays Printmaking is “Pleased as Punch” to present 26 etchings by printmaker and innovator Andrew Baldwin.

Widely exhibited in Britain, Canada, Australia, Hong Kong and the U.S., Mr. Baldwin’s etchings explore wordplay and idiosyncrasies of the English language using idioms to evoke strange, often surreal images. “A Nod and a Wink- The Prints of Andrew Baldwin” showcase both the technical achievements and the unique vision of this pioneering British printmaker.

Baldwin was named Welsh Printmaker of the year in 2007 and Most Exceptional Artist at the Federation of British Printmaking Exhibition and has been featured in the international magazine, Printmaking Today.